Above: Long-time servant to South Africa’s sugar industry, Tim Murray together with his wife Moira, display the awards he recently received from the South African Sugar Technologists’ Association and the International Society of Sugarcane Technologists which recognise his lifetime dedication to the industry.

Using the South African sugar sector’s “world class” skills and promoting improved relations between sugarcane growers and millers to promote product-diversification should be the foundation of a new era for the country’s embattled industry.

Increased integrity and accountability in the relationship between the government, growers and millers are now an imperative if South Africa’s sugar industry is to make the changes necessary for its survival, says long time servant to the sector, Tim Murray.

Murray, who was honoured at this year’s South African Sugar Technologists’ Association (SASTA) congress held in Durban, South Africa and the International Society of Sugarcane Technologists (ISSCT) conference in Argentina, is now calling for an overhaul of the sugar industry agreement to promote improved and diverse downstream production and the concomitant profits to be shared equitably across the sector.

In accordance with the current sugar agreement, the farmgate price for the crop is negotiated by the millers based on raw brown and refined sugar alone. Any downstream profits from cane biomass or cane juice by-products, which include speciality sugars, alcohols and syrup to name but a few, accrue to the millers.

The September 2019 price was set at R4 029.46 per ton RV (Recoverable Value) which is the lowest recorded in recent history and for some, particularly smallscale growers, the cost of production now exceeds income, leaving many farmers weighing up their options.

Further, as markets dry up in the European Union and elsewhere due to a world sugar supply glut, Southern African Development Community (SADC) countries such as Eswatini (formerly Swaziland) are flooding the South African market with their export excess as not only can they produce their sugar at a lower cost than the domestic market, they enjoy a limited access via a protocol to the free trade agreement under the SADC rules.

Also, consumer behaviour changes as a result of the South African government’s recently introduced Health Promotion Levy has meant at least 250 000 tons usually sold into the domestic market having to be exported at the lowest world price in over a decade.

Murray said while the debate on the division of proceeds had raged for as long as he could remember, the call by the South African government for a rescue plan for the embattled industry based on diverse production streams made a new deal now more urgent than ever in the history of the century-old industry. 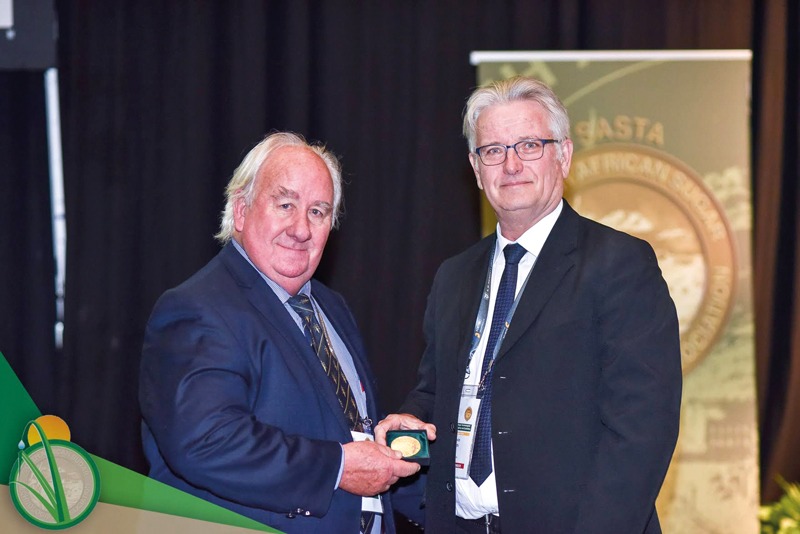 From left: Tim Murray is handed an award in recognition of his lifetime dedication to the industry by SASTA President, Gavin Smith.

Further, a move by South Africa’s sugar millers, which include the Tongaat Hulett group and Illovo Sugar in the main, to cut back their funding to sector research and development was not only short sighted but would impact the integrity of the industry in the long term, he said.

“Right now, there is a real disconnect between our millers and the growers, and when you consider the sort of pressure we are all feeling, we have to work closer together for the good of the industry and its survival. What we need is broad-based accountability and integrity that has the interests of all our stakeholders, rather than just shareholders, at heart,” he said.

Murray was the 19th recipient of a 9ct gold medal long service award from SASTA and was inducted as an honorary life member of the ISSCT - a limited membership which is awarded only on the death of an existing member of 25 people at any time. He received a plaque from the ISSCT recognising his “distinguished contribution to the sugar cane industry”.

Now a commercial grower, Murray started out his career in the 1970s as a Research Engineer at the South African Sugar Research Institute (SASRI) before setting up his own consulting partnership and sugarcane farm called Fat Acre in the New Hanover district in the KwaZulu-Natal Midlands.

While he now holds a board member position, Murray was chairman of SA Canegrowers for well over a decade and served as vice chairman of the association for “many” years.

But now he warns, the industry to which he has dedicated his life is on the brink of collapse and innovation must underpin any proposed rescue efforts.

Assessing the current status of the industry, Murray said from a research perspective South Africa punched above its weight in comparison with the rest of the world’s sugar producing countries.

However, he had seen a marked drop in both cane quality and milling performance in the domestic industry in recent years and it was this decline Murray used to headline a peer review paper which he delivered at this year’s ISSCT conference.

And while the production of fuel-grade ethanol and green electricity has been mooted as a diversification strategy, Murray said neither were viable as long as the domestic energy supply was coal based and basic fuel prices remained lower than the cost of production of the ethanol.

“What we need is better use of the fibre, including trash from the farms. Our domestic sugar price is good, it’s the export price, for our surplus production that is a problem and then of course the imports from countries such as Eswatini.

Sugar should be treated as a sensitive product by the South African government in the Africa Wide Free Trade Agreement and we should be looking at creating a quid pro quo agreement between ourselves and the rest of the countries in the SADC region. For example, what about signing research contracts with our neighbours in a range of commodities to add value to our research capacity? This works well in Argentina for example.

Bio-refining is a very good option for us as well, so many plastic products that we use in our daily lives could be made from sugar or sugarcane fibre. The skills that we have in South Africa’s sugar industry are world class. I believe they could be applied effectively in our neighbouring countries and across a diverse range of commodities,” Murray said.