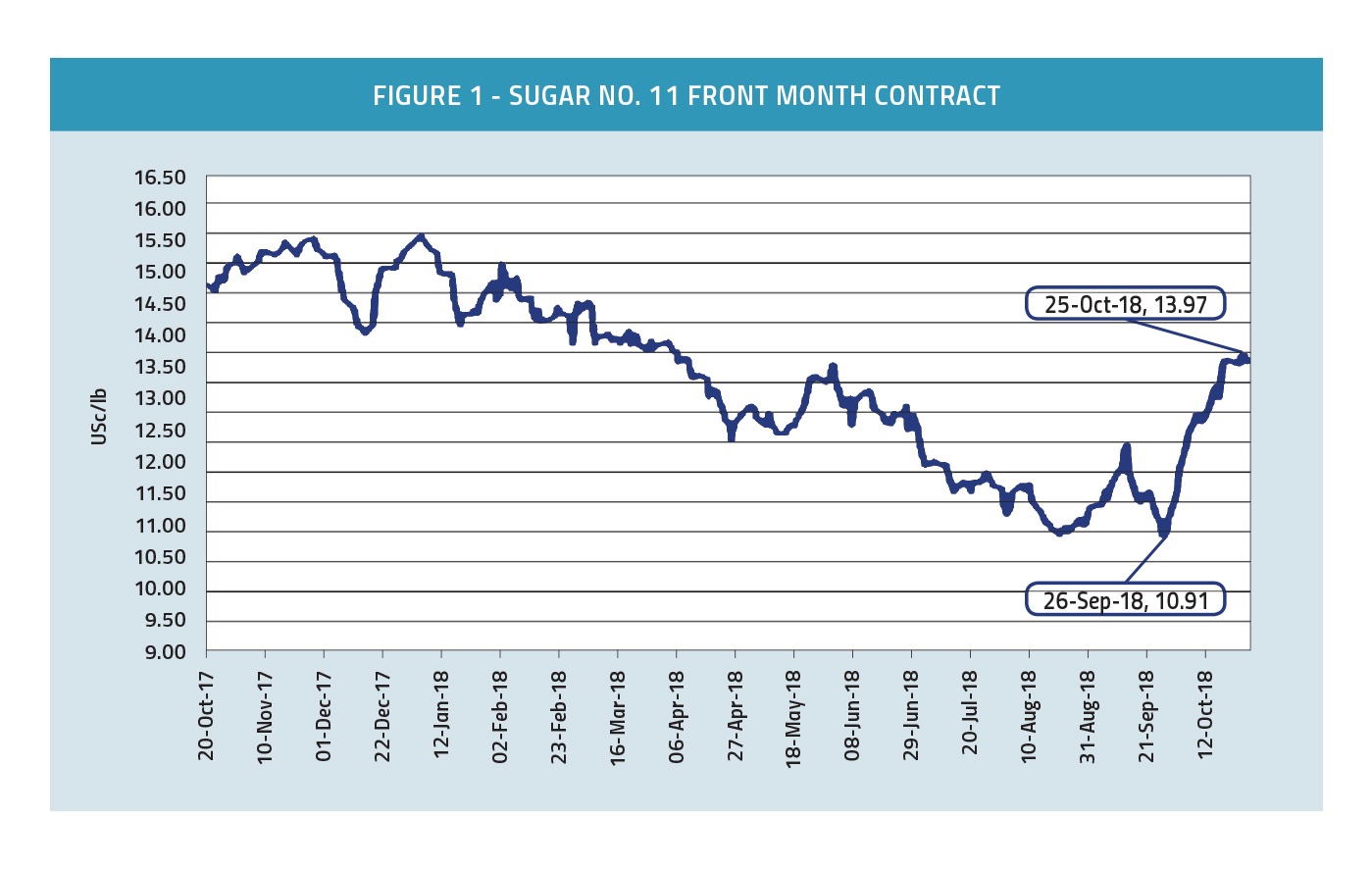 Based on the information presented above, the recent rally the market experienced has had very little support from a fundamental perspective. The news of reduced Brazilian and European crops has been a persistent feature since the start of 2018/2019 season. If fundamentals are not impacting prices significantly then what is?

Despite reports of reduced production out of India, the Indians are still expected to be the world’s largest sugar producers for the 2018/2019 season. Recent reports regarding the condition of the crop in the southern parts of Maharashtra has resulted in estimates for this key growing region reduced from 11.5 mmt to 9 mmt. The reason behind the reduction can be attributed to white grub infestation which has led to cane wilting. The infestation resulted from a below normal southwest monsoon in this region. The reduction in Maharashtra has reduced the total production estimate for the 2018/2019 season from 35.5 mmt of sugar to 33 mmt sugar.

On 26 September 2018, the Indian government announced the country’s much anticipated export program for the 2018/2019 season. According to the Times of India, the Government approved a Rupee 45 Billion package for sugar industry which included the following:

With a massive 2018/2019 crop on the cards and ample government support, the market awaits for an indication on significant exports from India. Despite the recent rally in prices, the Indians’ have been rather inactive in the export market. With prices sitting close to 14.00 US c/lb and export parity from Indian perspective in the region of 12.50 US c/lb (as per recent Kingsman reports) why would India not export? The reason behind the lack of activity, rest on another government decision. The Indian Sugar Mills Association (ISMA) wrote to government asking them to increase the minimum support price of sugar. Any increase in the minimum support price will automatically increase the export parity price. The world market will watch the situation unfold with bated breath in the coming weeks as any decision will definitely have an impact on prices.

Along with India, Thailand are expected to have another massive crop during the 2018/2019 season. Latest Kingsman estimates suggest Thai production of around 14.2 mmt for the season with some upside risk to this estimate on the back of favourable weather conditions. While this does represent a 2% reduction from the numbers posted last season, one can definitely expect to see Thailand active in the export market.

Brazilian production for the 2018/2019 season (April-March) has been hampered by adverse weather conditions. The start of the season saw extremely dry weather in major growing regions, which has culminated in lower agricultural yields in the current season. UNICA released production figures for the first half of October last week. The numbers posted showed a sharp decline compared to the number achieved last season. Cane crushed for this period was down 21.3% when compared to last year crush figures. According to UNICA, the cumulative amount of cane crushed so far this season has decreased drastically when compared to last season’s figures.

The Europeans have also experienced adverse weather conditions which has affected their sugar beet campaign. An extremely hot and dry summer has been followed by limited rainfall in key beet-producing regions. Cumulative precipitation in France, Netherlands and Belgium for the month of October has reached only 14% of the seasonal norm. The picture in Germany is slightly wetter with precipitation reaching 39% of the seasonal norm. These adverse conditions has resulted in production cuts for the region, the estimate for the 2018-2019 season has been revised from 21 mmt to 19.5 mmt.

The rally experienced in the market during the past month has been driven by the speculators covering their massive short position rather than a significant change in fundamental dynamics. The market still faces a number of key question in the short to medium term which include the following:

In the face of these un-answered questions, the market is certainly in for a volatile experience in coming weeks and months.