Businesses across South Africa and all over the world, implement plans and strategies to remain relevant, grow their market share and increase revenues. Similarly, sugar producing businesses have optimised on the value of their primary input ‘sugarcane’, producing saleable products beyond the food sector, into the energy and bioeconomy sectors.

Simply put, a sugar only industry is a sunset industry, which is why it is essential for the South African sugar industry to diversify its product offerings into energy and other biobased niche product markets. New markets will afford members of the industry to grow the ‘revenue pie’, reduce their reliance on sugar markets alone and improve their sustainability into the future. Importantly, new products, new markets and new revenues streams will be catalytic to advancing the transformation, competitiveness and profitability of an otherwise sunset industry.

New products will contribute towards advancing the national priorities of South Africa such as that of transformation building a new generation of black producers and industrialists of significant scale and capability, opening markets for new black entrants, developing rural enterprises and communities, creating jobs, investing in infrastructure and local manufacturing and intensifying procurement from previously disadvantaged groups. 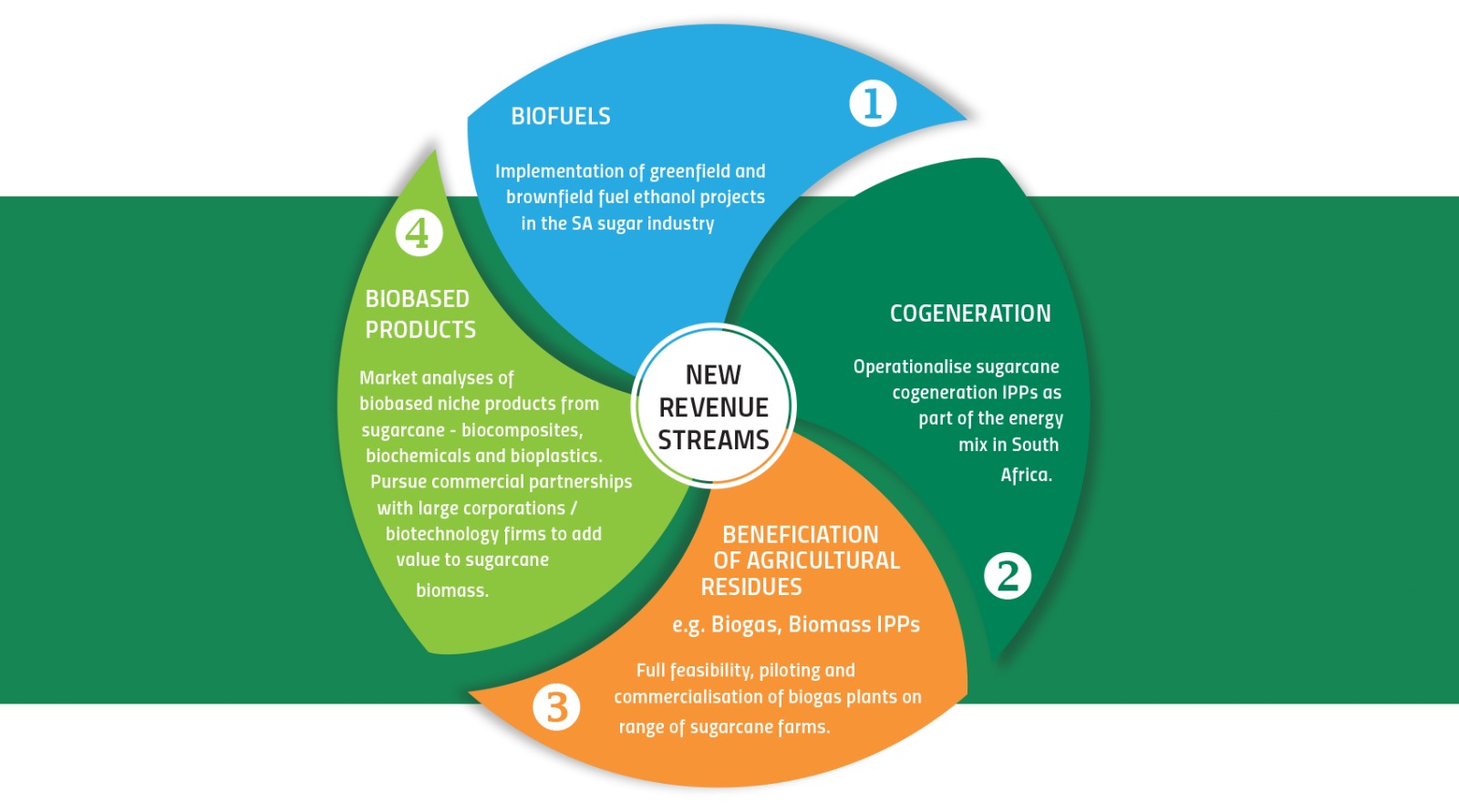 Four potential areas of diversification have been identified based on the advances made in the international sugar arena and should be pursued in South Africa. These include:

The industry needs a ‘game changer’ that allows for the swift introduction of proven technology and production, with significant impact on sugar volumes being uplifted through a new market. Sugar to ethanol for blending with petrol is one such ‘game changer’, usually 10% blend (E10 – 10% ethanol, 90% petrol). However, Brazil has shown a blend rate of up to 27%, without any detrimental impact on vehicles. Market predictions show that for the next decade fuel ethanol is expected to grow at a rate of 1.5 -1.7 % a year, with approximately 143.1 billion litres estimated in 2019. Furthermore, supply is expected to move away from the US and EU to BRICS countries like Brazil, China

The SA sugar industry proposes that government in partnership with the private sector implements the biofuel market enablers that have been enacted in other sugar producing countries to establish a biofuels market in South Africa. Programmes that would launch projects in the biofuels value chain, create investment certainty, support innovative financing models and lock in uptake and/or exports. If this is done, it would then be feasible for brownfields and greenfields fuel ethanol investments to be made in South Africa.

Did You Know?
Cogeneration

Did you know that just over 8 % of global electricity generating capacity uses cogeneration, with a total global installed electricity capacity in the order of 325 000 MW?

The International Sugar Organisation August 2018 Market Report – has shown that total worldwide cogeneration capacity has surged in the last four years, growing at an impressive 43.5% since 2014 to 2017. Sugar producing countries like Brazil, Colombia, Guatemala, India and Mauritius have all expanded their cogeneration capacity.

With significant gains in India (doubled capacity) and Pakistan (quintupled capacity). Sugar mills in KwaZulu-Natal and Mpumalanga have been cogenerating for decades, producing electricity for own use. Cogeneration using bagasse and sugarcane leaves with the sale of electricity to the national grid or private buyers is another potential source of revenue stream for the South African sugar industry.

Electricity sales would support the financial sustainability of the industry but also support transformation and black economic empowerment in the value chain, through for example construction and operation of the cogeneration power station, ownership in the new cogeneration power station business entity / special purpose vehicle, procurement of additional sugarcane leaves and residues from black growers, logistics for the transport of sugarcane leaves, additional jobs in sugarcane agriculture if green cane harvesting is adopted through a new revenue stream.

Sugar Mills
in KwaZulu-Natal and Mpumalanga have been cogenerating for decades, producing electricity for own use.

The beneficiation of agricultural residues (sugarcane tops and leaves and other mixed feedstocks) could be realised through, for example, biogas production on sugarcane farms, aiding in grower sustainability. This is often an underutilised area, with minimal research been undertaken specifically on the generation of biogas from sugarcane residues (cane tops and trash). Hence a full feasibility study for sugarcane biogas programme with pilot plants on different size sugarcane farms for optimal efficiencies is needed.

Depending on the construction, conversions and connectivity in the design of the biogas plant, biogas can be used as a heat energy source, for electricity generation, and in the transport sector as a fuel for vehicles. The digestate which is a by-product of biogas production is also a nutrient-rich fertiliser. One of the major hurdles that still needs to be overcome is for small scale biogas producers to be able to feed electricity into the national grid and in so doing offset their cost of electricity, or wheel electricity to other users at an affordable rate.

World-wide, a move towards biobased chemicals and materials is rapidly gaining momentum for reasons of sustainability and reducing environmental impact (minimizing use of fossil-based resources). Persistence Market Research (2015) put the value of the global bioplastics packaging market for food and beverages at USD 28.5 billion by 2020, a compound annual growth rate of over 36% between 2014 and 2020.

Did You Know?
Biobased Bottles

Did you know that both Coca-Cola and Woolworths import components for their plant bottles from Brazil into South Africa?

Did you know that polylactic acid is a biobased polymer produced from lactic acid obtained through fermentation of sucrose?  It is now one of the most popular biobased materials to produce bioplastics and is biodegradable under certain conditions. There a just a few plants in the world compared to the polyethylene market, however the demand is expected to grow over the next few years.

Such partnerships and initiatives could offer the SA sugar industry new products and new revenue streams, reducing its vulnerability and exposure to the global sugar market, while expanding with new black producers and industrialists into new niche value chains. Demand and market analyses, enabling policies and regulations, optimised processes that positively impact on total production costs are all key elements for offering competitive prices that are attractive to the end-user demand.

Did You Know?
Compostable Carrier Bags

Did you know that Pick n Pay has launched a compostable supermarket carrier bag?

The bags are made of vegetable matter such as maize and potato starch. It takes between three to six months to decompose, compared to 500 to a thousand years for a typical plastic bag to decompose.

The South African sugar industry is at a critical tipping point. Survival and growth of the industry will not lie in the current traditional industry products alone i.e. sugar and molasses. New products, new markets and new revenue streams that aim to harness the full value of the sugarcane stalk and by products from agricultural and agro-processing are crucial to embarking on the South African sugarcane renewables and biobased products journey. These products have added benefits of contributing to a greener economy, less dependence on fossil fuels, reducing greenhouse gas emissions and creating further opportunities for employment.