The people of Nkomazi have been scoring economically from the annual Selati Cup, sponsored by RCL FOODS, since its inception 13 years ago.

“Selati Cup (played every year from March to June) boosts the local economy in a big way. Selati Cup is a community builder. Nkomazi would be nothing without it,” says 61-year-old Andrew Ngwenya, a number one fan of Selati Cup who has been following the tournament religiously since it started. A recently retired school principal, his face lights up as he tells the good story of the Selati Cup. “The young and old support the cup. Each and every game attracts lots of supporters – the stadiums are always packed to capacity. The business is booming for hawkers”. 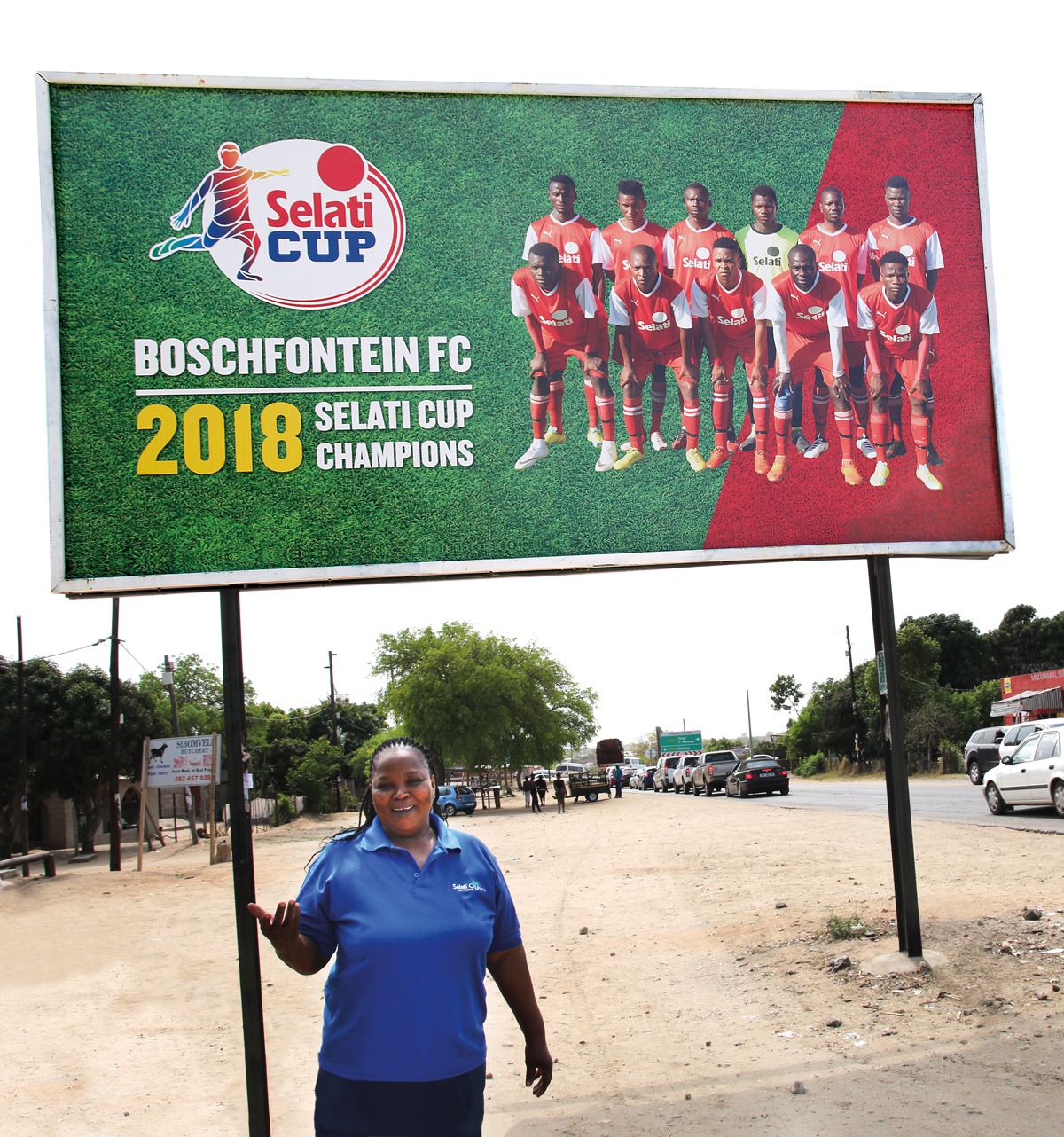 Above: Nomsa Mathobela is driving women participation in football in the area.

One hawker who has benefited tremendously from Selati Cup is Simangele Sigudla. Sigudla sells pap, rice, chicken, beef and fish during the cup. She has been doing so since the first game kicked off in 2005. Thanks to the Selati Cup income, she has been able to build herself a nine-bedroom house. In addition, the money has enabled her to send her child to college to study engineering. “During the last 32 I make about R1 000 a day. With the Top 16 it gets even better – I make around R4 000 a day,” she says, smiling from ear to ear. She adds: “Selati Cup has become a very important permanent feature of Nkomazi. It is the best thing to have ever happened in our region. It has brought back our dignity as we are now able to take care of ourselves, especially as women, financially.”

RCL FOODS Sugar Business Unit Director Derek Van Niekerk says the company has always had passionate about investing in people and local communities. “We know that for a lot of people, soccer is the sweet spot. In a society plagued by economic challenges, our aim is to offer fun, fellowship and healthy community competition for fans, as well as to hopefully open doors for young players who want to develop their sporting careers. We believe that we have both a responsibility and accountability for the wellbeing of the communities in which we operate. This is our way of giving ‘More’ back.”

He adds: “From humble beginnings in 2005 with just 32 competing teams, the tournament has grown exponentially in both popularity and attendance, with an impressive 288 teams in 2016 and 128 male teams and 8 female teams in 2018. Today, it is more than just a soccer tournament. The tournament draws large crowds and pits teams from different villages and areas against each other; creating a healthy competitiveness and sense of community loyalty. Through their common love of soccer, local government has been humbled by the community’s enthusiasm for the contest, offering their support in the form of municipal stadia and ensuring entrance to each match comes at no cost for fans.”

From humble beginnings in 2005 with just 32 competing teams, the tournament has grown exponentially in both popularity and attendance, with an impressive 288 teams in 2016 and 128 male teams and 8 female teams in 2018.

The tournament has become the stomping ground for talent scouts seeking to entice local star footballers into joining professional teams. Some players who have captured the tournament and mesmerised fans with their footballing prowess have been snatched by some of the finest teams in the province while some have gone on to ply their trade for the Premier Soccer League clubs! One of those footballers is the supremely gifted midfielder Jabulane “Master” Dladla who is now the hot property of Mbombela United, a top club which competes in the National First Division. Dladla is also the current face of Selati Cup. No wonder the cup has been hailed as a university of football in some quarters. And the Selati Cup Ambassador is none other than Lucas “Rhoo” Radebe, a soccer legend who captained both Kaizer Chiefs and Bafana Bafana. The retired brilliant defender also captained Leeds United, a Yorkshire side where he made an indelible mark and left an everlasting legacy of excellence and inspirational leadership!

The cup has also provided female footballers with a platform to shine and showcase their talent. “Some of these players have become big names because of the Selati Cup,” says a beaming Nomsa Mathobela, Chairperson of the Local Organising Committee of the tournament. One player has been selected for the national team Basetsana while others have their names placed on the database for Banyana Banyana. “Selati Cup is a very good platform for these guys. It gives them a chance to show off their skills in front of the masses,” says Mathobela.

This year’s highly competitive tournament lived up to expectations. It produced some of the most exciting and thrilling moments for ardent fans who always flock to stadiums in their numbers. The final between Boschfontein Football Club and Naas Academy was an edge-of-the-seat thriller which ended in a 3-3 tie, forcing the roller-coaster match to be decided by penalties. The penalty shootout was also a pulsating affair which seemed to have no end in sight as penalty takers from both sides found the net with ease. But a Naas Academy player blinked, allowing Boschfontein a hard-earned victory and a R100 000 cheque!

Shakes Shabangu, Boschfontein FC coach, used some of their prize money to buy shoes for 15 local learners and also bought his 24 players brand new soccer boots. Shabangu exudes optimism and confidence that his side will defend its title, come next year. In the ladies’ final, Schoemansdal Super Strikers gave Phefeni United no chance – they easily disposed of them with a 2-0 win, thereby booking themselves in the history books of the Selati Cup.

The cup statistics tell a story of a truly enthralling showpiece! A total of 128 games played, a whopping 680 goals scored, only 28 red and 325 yellow cards issued, an impressive 11 hat-tricks and a phenomenal 54 braces! It doesn’t get better than this!