A smallscale grower couple say they are taking SA Canegrowers leadership training seriously and writing their own farming story rather than allowing the crisis in the sugar industry to dictate their future.

Following the week-long SA Canegrowers leadership training for the newly launched non-profit company, S.A. Women in Sugarcane in the KwaZulu-Natal Midlands late last year, Thandeka Shozi returned to her home in Esikhaweni with renewed resolve to achieve her dream of becoming a commercial sugarcane farmer despite the challenges facing the sugar industry. 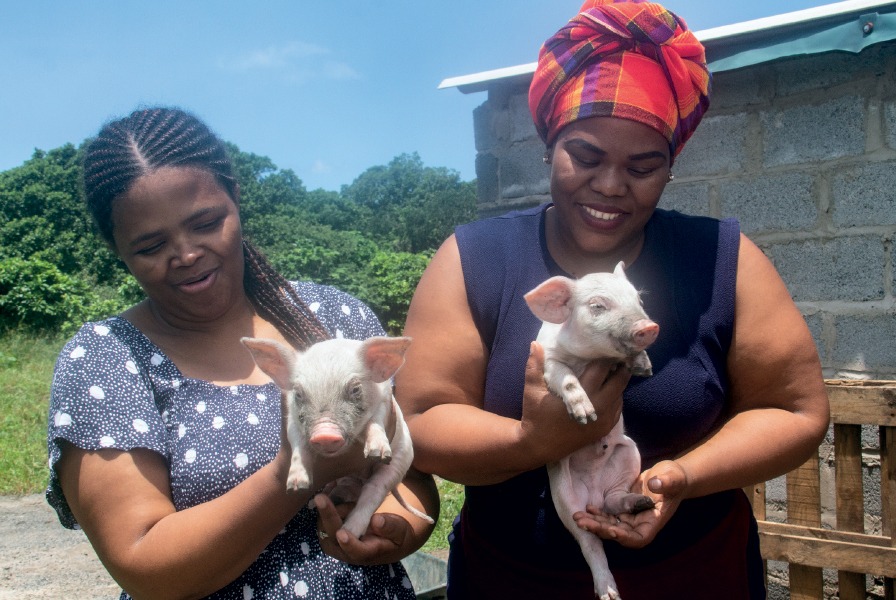 “There were two very important points that stayed in my mind after the SA Canegrowers’ leadership training at Lythwood in the Midlands. The first was as leaders we are responsible for writing our own stories, and the second was the importance of diversifying our sugarcane farming because of the crisis in the industry,” Thandeka Shozi said.

Together with her husband, Mndeni, the couple came up with a plan to invest in a small piggery to supplement their sugarcane farming income.

Roping in family members and neighbours, six pig pens were built while Mndeni enrolled in a piggery management course at the Baynesfield Training Academy outside Pietermaritzburg. At a cost of about R1 000-a-pig, the Shozi’s bought three pregnant Large White sows and a boar.

When the SA Canegrowers’ team visited the couple at their home in Empembeni near Esikhaweni in Zululand just weeks after the pigs were installed in their pens, 12 piglets had already made their appearance with the remaining sow ready to produce her litter at any time.

“Unfortunately, two of the piglets died as they were very small at birth, but we are really happy with the ones that are healthy and strong,” Thandeka said.

And while she admits she knows very little about farming pigs, the Durban-born woman says she is learning fast.

“The food for the pigs is very expensive at about R350-a-bag, but we were given 14 bags of food by the Department of Agriculture. That has really helped us. We also supplement the pig food with vegetables from our farm garden,” she said.

SA Canegrowers Business Advisor for Felixton, Immaculate Sibisi said the establishment of a seed cane plot where N27, N39, N41, N59 and N58 were under trial would assist the smallscale growers, such as the Shozi’s, to improve their yields and balance their input costs against their returns.

In normal circumstances, Sibisi said planting alternative crops or introducing diverse income streams to their farming operations, helped to provide a constant income for the growers particularly during the months when the mills were closed from early December until mid-April.

But now, with issues of over-supply in the local market, and the price unable to keep up with increasing costs and a small return especially on one-hectare plots, diversification was more important than ever, as it was helping growers such as the Shozi family to ride out the crisis.

“The current situation in the sugar industry is really creating extreme financial pressure on all our growers. Diversifying helps to ease the pressures. My role now as a SA Canegrowers representative is to support our members through training related to any production streams they might have. I am working alongside them to find access to markets and to help establish access to funding or subsidies for their start-up enterprises,” Sibisi said.

In a document presented to the Department of Trade and Industry on diversification options for the South African sugar industry, Commercial Executive for SA Canegrowers, Thomas Funke said it was critical that growers, and in particular smallscale growers, change their production practices in order to survive.

“Sugar cane is no longer viable as a standalone crop. The industry faces exposure to the world market which is offering unsustainable average prices at the moment. The introduction of the Health Promotion Levy has really hit the industry hard as well as the sugar flooding into the country from Eswatini,” Funke said.

“At a meeting with the government where we discussed a diversification strategy for our industry, officials were clear the sugar industry must not approach the crisis with a “begging bowl” mentality, but rather we should be coming up with solutions to the various issues we face,” he said.

And while the main argument in the document is aimed at diversifying end products such as using sugarcane for alternative energy production such as gasification or biofuels for example, Funke said smallscale growers such as Thandeka and Mndeni Shozi were to be applauded for their proactive attitude.

“There is no quick fix to this issue. There is evidence that farmers are already diversifying, but we still have 20 million tons of cane that must be harvested and sold this season at a rock bottom sugar price and in competition with tons of sugar coming in from Eswatini at a price we just cannot compete with,” he said.

Despite these seemingly insurmountable hurdles for this over 90-year-old industry, Thandeka Shozi says she is lifting her eyes. “At the SA Canegrowers Emerging Leaders training we were taught that if we look down, then we will go down. But, if we look up, keep our eyes up and fixed on our goals we will be the leaders we were born to be. My husband and I are leading ourselves, we are leaders in our finances and leaders in our farming practices. Our dream will come true and one day we will be commercial farmers, we are going to keep looking up,” she said.