The New York No.11 July 2019 contract came off the board, closing at 12.32 USc/lb on 28 June 2019. The end of the New York No 11 July 2019 contract also saw a record delivery to the July expiry with 2.1 mmt of sugar being delivered to the New York July expiry. The main origin was Centre South (CS) Brazil. The other major destination to appear on the tape was Thailand with approximately 600 000 mt. This is the largest delivery of Thai’s that the tape has seen over the past ten years.

The front month contract, October 2019 closed at 11.79 USc/lb on 17 July 2019. This represented the lowest levels posted by the contract since 17 May 2019, when the contract closed at 11.93 USc/lb. Over the past five trading days, the contract has lost in excess of 50 points. The recent drop in prices has occurred despite a supportive macroeconomic backdrop.

The Brazilian Real has strengthened considerably over the past few weeks trading at 3.76 BRL/USD, which is the highest level since 20 February 2019. Brent Crude prices have also firmed, raising to USD 65.13 per barrel from USD 60.94 per barrel a month ago. According to Macquarie, at these price levels, the market shows solid scale commercial buying as the commercial buyers look to absorb the speculator and system induced selling in the market. The speculators have yet again started another selling cycle.

The London No 5 August 2019 contract expired on 16 July 2019, with a record high delivery (for the August contract) of 793 350 mt of Thai sugar. This was the second largest delivery in the history of the No 5 contracts behind the May 2008 delivery of 810 800 mt. The August 2019 contract went off the board at 295 USD per ton, which was the lowest close for the contract and the lowest close for a spot contract since May 2008. 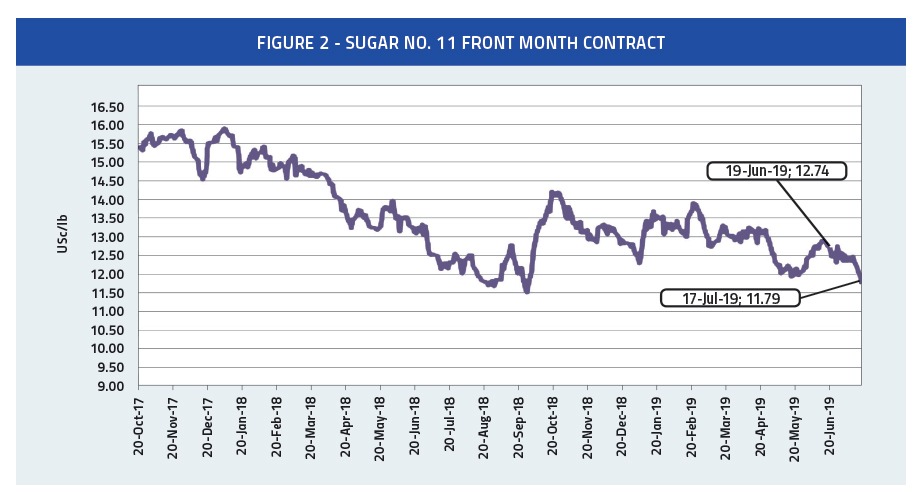 The start of July 2019, saw reports of frost in CS Brazil surface. According to Marex, on the nights of 5 and 6 July 2019, temperatures fell in the southern most cane areas to a low of -3.6 degrees. While the drop in temperature ensured that some damage was done to the cane, the area affected was not large enough to cause a massive reduction to the 2019/2020 Brazilian estimate. For the period 1 April – 1 July 2019, sugar production has decreased by 871 000-mt year on year. The drop in production can be attributed to the following:

In board terms, the news out of Brazil remains supportive to sugar. The Brazilian production remains in favour of ethanol, cane quality remains low and the firmer corn prices in the US have opened the window for exports. More importantly, the domestic demand for ethanol remains strong. The current macro-economic environment i.e. a stronger Real and high Brent Crude price may prompt Petrobras to increase the domestic gasoline prices. Any increase in the domestic gasoline price will have a positive influence on ethanol parity. 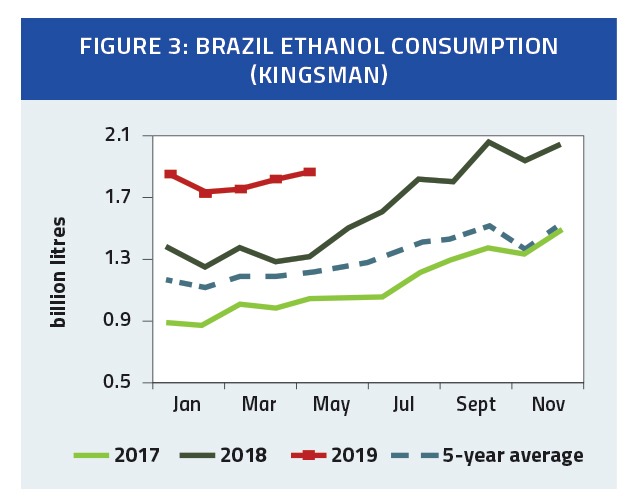 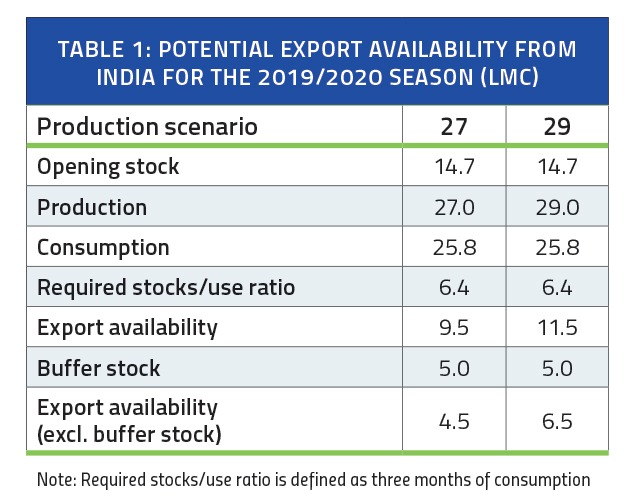 Fluctuations in Brazilian production and their sugar mix in particular will continue to influence the market in the coming weeks and months, the market also faces a key question related to the surplus left in India and Thailand.

While the Indian government has announced its first new support measure to the sugar industry post the elections, the new increase in the government-financed buffer stock from 3 mmt to 5 mmt does little to help the country deal with its stock hanging over the market. As illustrated in Table 1, there is still a possibility for India to export between 4, 5 and 6, 5 mmt in the upcoming season. 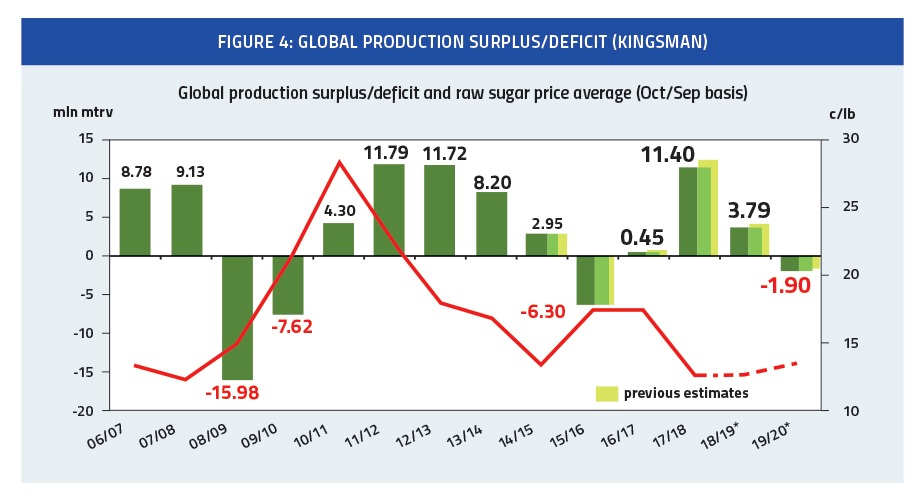 Research house Marex Spectron, believe that the Indian government will almost certainly attempt to provide an export subsidy, which will look more WTO compliant. A recent presentation by the Indian Sugar Milling Association (ISMA) indicated that the industry is lobbying for support to export in the upcoming season, as well as a further increase to the domestic price to help support cane payments to farmers. While nothing is certain as yet regarding Indian exports, any news of potential exports and exports subsidy, will most certainly weigh-in heavily on the market.

As mentioned previously, the expiry of the July 2019 contract saw the largest delivery of Thai’s to the tape over the past ten years. This highlights the current supply situation in the Far East. Weak demand for whites from China resulted in the Thai’s focussing heavily on raw sugar production during the crush. Traditional homes for Thai raw sugar such as Indonesia and refiners in China prefer other higher quality origins, which meant that there was no other alternative than to deliver the sugar to the tape. Rumours have recently surfaced indicating that some of the Thai raws are deteriorating in quality, making the sugar extremely difficult to place. LMC have stated that some Thai millers may decide to convert more raws into whites, which are easier to store. Should this happen, the Thai’s could be pushing their over-supply raw problem onto the white market.

Much of the trade believe that the 2019/2020 season will remain a deficit year of production, on the back of a low sugar mix in Brazil and lower production in India and Thailand. However, the trade has not been able to reach consensus on how the massive global stock levels will be dealt with in the coming months. In addition to the massive stock levels, the market will also have to wrestle with a highly volatile energy market, fluctuations in the Brazilian Real and most importantly, the unpredictability of the speculators. With the speculators in selling mode, current market conditions point to more downside risk than upside potential in the short-term. Most research and trade houses believe that the market will trade between 11.50 US c/lb and 14.00 US c/lb range in the medium-term. The only constant in the world sugar market remains a high degree of uncertainty.