THE ECONOMIC EFFECT OF REACHING THE FINANCIAL TIPPING POINT

In the words of former Soviet statesman, Nikita Khrushchev, “Economics is a subject that does not greatly respect one’s wishes.”

The quote above is the absolute truth, as much as we wish the sugar industry was in a better position, unfortunately, economics does not respect our wishes.

The April – June 2019 South African Sugar Journal featured an article by my colleague Dr Muhammad Kadwa which explained the financial tipping point to which growers were being pushed. In this article, we show some of the basic economic principles that are pushing growers to the edge and the resultant effect this is starting to have on capital and labour. The basic economics of growing combined with the economic shocks being experienced by the industry such as severe drought, imports and the Health Promotion Levy (HPL) have pushed growers into making difficult management decisions.

For any business to survive there is a fundamental economic equation that must work out positively and that is revenue minus cost should equal profit.

The ever-increasing costs of farming is an issue that growers deal with worldwide, however, South African growers often deal with significant increases in costs well above inflation. These shocks erode the grower’s ability to realise a return from sugarcane farming. When one looks at the input cost indices which show the rate of change of costs over time, one can clearly see the battle that growers face in the everyday management of their businesses. The costs of production of a physical commodity like sugarcane are in most cases inevitable but growers constantly need to find ways of being more cost efficient by using technology and improving the output of labour.

On the other side of the equation, revenue is often something that farmers do not have any influence over – they are generally price takers. But in the South African sugar industry partnership enacted by the Sugar Act, there is a negotiated price considering the market fundamentals of supply and demand. However, being that as it may, economics in a global environment does not respect one’s wishes. Push the price too high with a low protection environment as was the case in 2017 then the imports flood in. Implement tariff protection which slows the imports down and allows the price to improve and another shock enters the system, the HPL which has lowered demand for sugar in the beverages sector. This has severely impacted on the revenue growers achieve, no matter that growers have improved production and quality in the seasons after the drought.

By putting the two sets of indices together one can see that the index of input costs out paces the RV price index. The gap between the input cost index and the RV price index is called the Cost/Price Squeeze. This squeeze is felt by growers, especially the significant difference between the two at this moment in time. For growers to survive they must continue finding ways to produce more with less as efficiently as possible.

The evidence all points to growers that are under severe financial stress. The sustained pressure growers have been under since the devastating drought of 2015 and 2016, the price decline due to imports in 2017 and now the HPL in 2018 and 2019, are taking their toll on growers and the profitability of their sugarcane businesses. 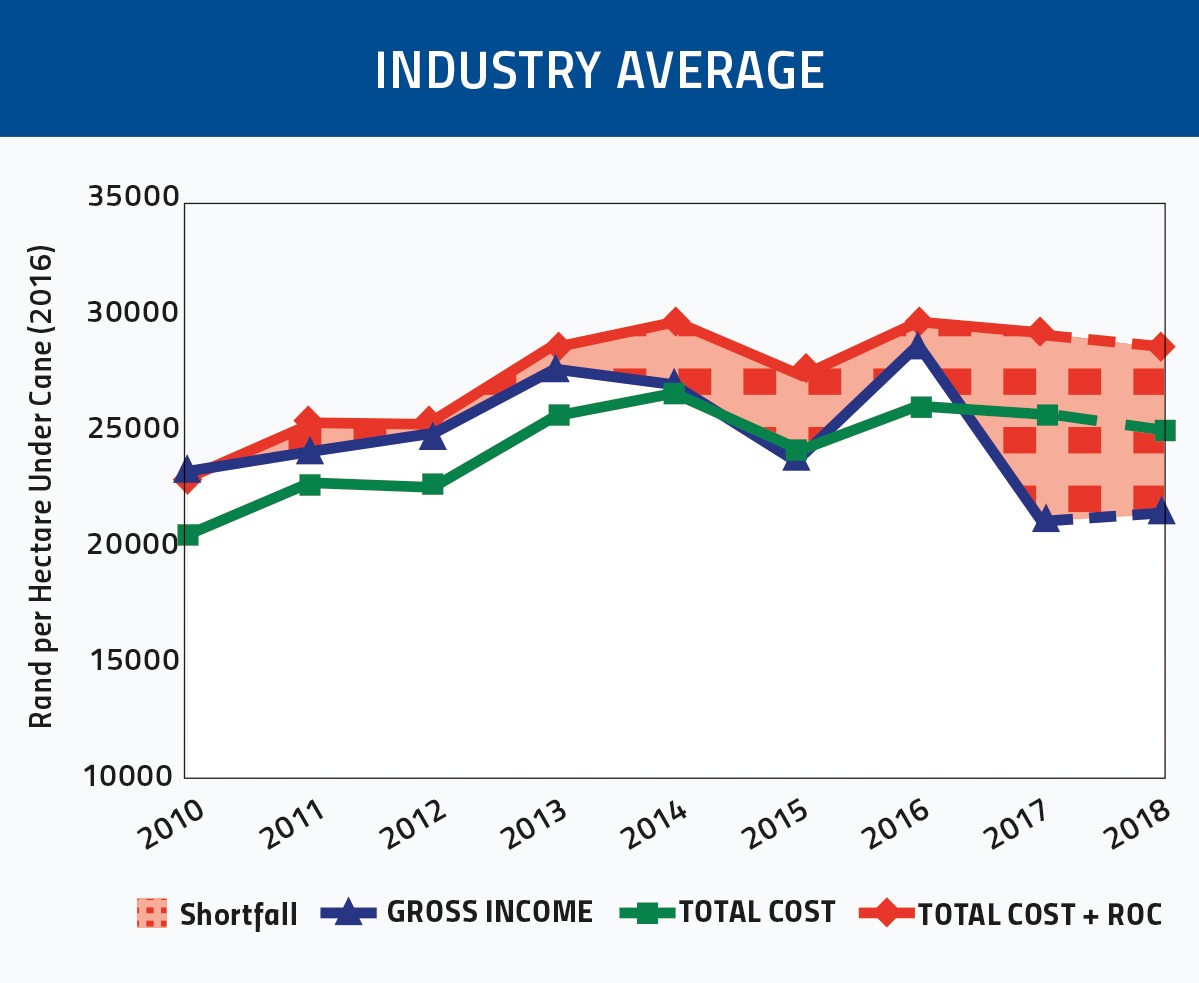 The Red Area Graph which takes the real (inflation adjusted) Gross Revenue, Total Costs and Return on Capital (ROC), compares them to one another. The Red Area (where the graph gets its name from) is the difference between Gross Revenue and Total Costs plus the ROC. Therefore, for a grower to ensure long term sustainability Gross Revenue must be at the same levels of Total Cost including Return on Capital. If that does not occur, grower’s re-investment on farms will be eroded over time. Their cane farming enterprises will not be sustainable, and growers will move out of cane production.

The Red Area Graph shows that growers entered a sustained period of financial difficulties from 2014 onwards when the drought struck. However, in the short-term growers were able to meet their total costs. The increase in the price in 2016 due to low supplies caused by the drought were beneficial to growers but were short-lived and the subsequent decrease in the RV price of 27.8% over two seasons due to the flood of imports and the HPL pushed the grower’s gross income to well below total costs in 2017.  Therefore, growers on average are unable to meet their short term growing requirements let alone the re-investment needed for sustained production in the long term.

The effect of reaching the tipping point

The effect of this is grave as growers, growing a perennial crop, only realise part of the value of their sugarcane over 12, 15 to 24 months depending on the area they produce in. Growers are also locked into this significant investment in the soil for up to 2 years depending on the area they produce in. Like we are seeing in many businesses both large and small in South Africa, these growers are having to make hard decisions. Many growers have been slowly diversifying out of sugarcane over the last 17 years and therefore we see a decline in area under cane of 16%. This is in basic economics is reallocation of capital. But growers also need to lower their production costs if they are going to survive. The South African Canegrowers’ Association conducted an online labour survey recently where data was gathered on labour and the retrenchments that have occurred from the drought period 2016 to the low-price environment to the end of 2018. 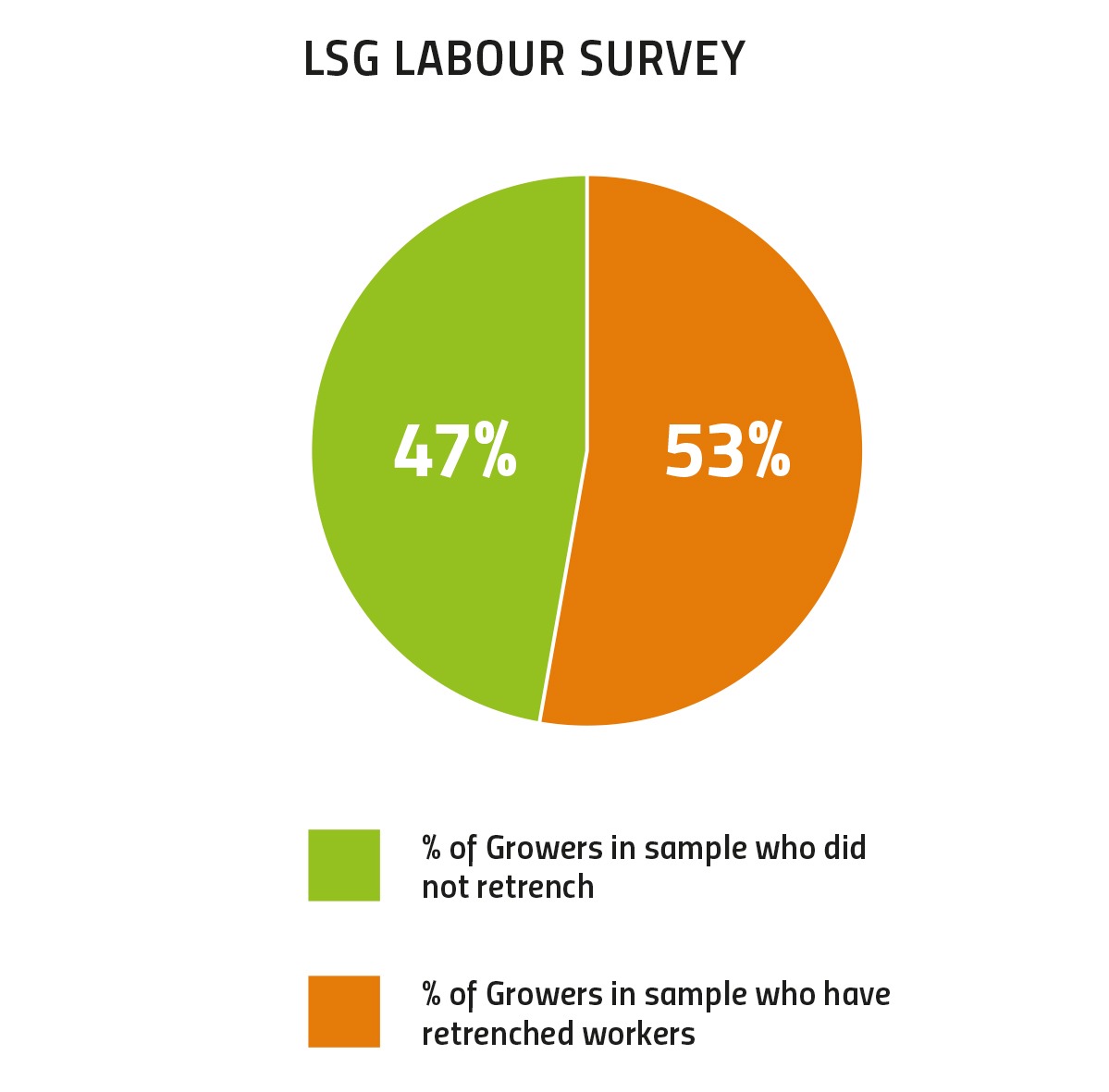 The sample consisted of 21% of registered LSGs (large-scale growers). The total area under production for the sample was 73 208 hectares making it 28% of the total LSG area under cane. The results showed that the drought and the low-price environment have had a significant impact on growers and subsequently their workforce. 53% of the growers in the sample said they had retrenched workers. This amounted to 14% or 2564 workers of the sample workforce that had been laid off during the survey period. 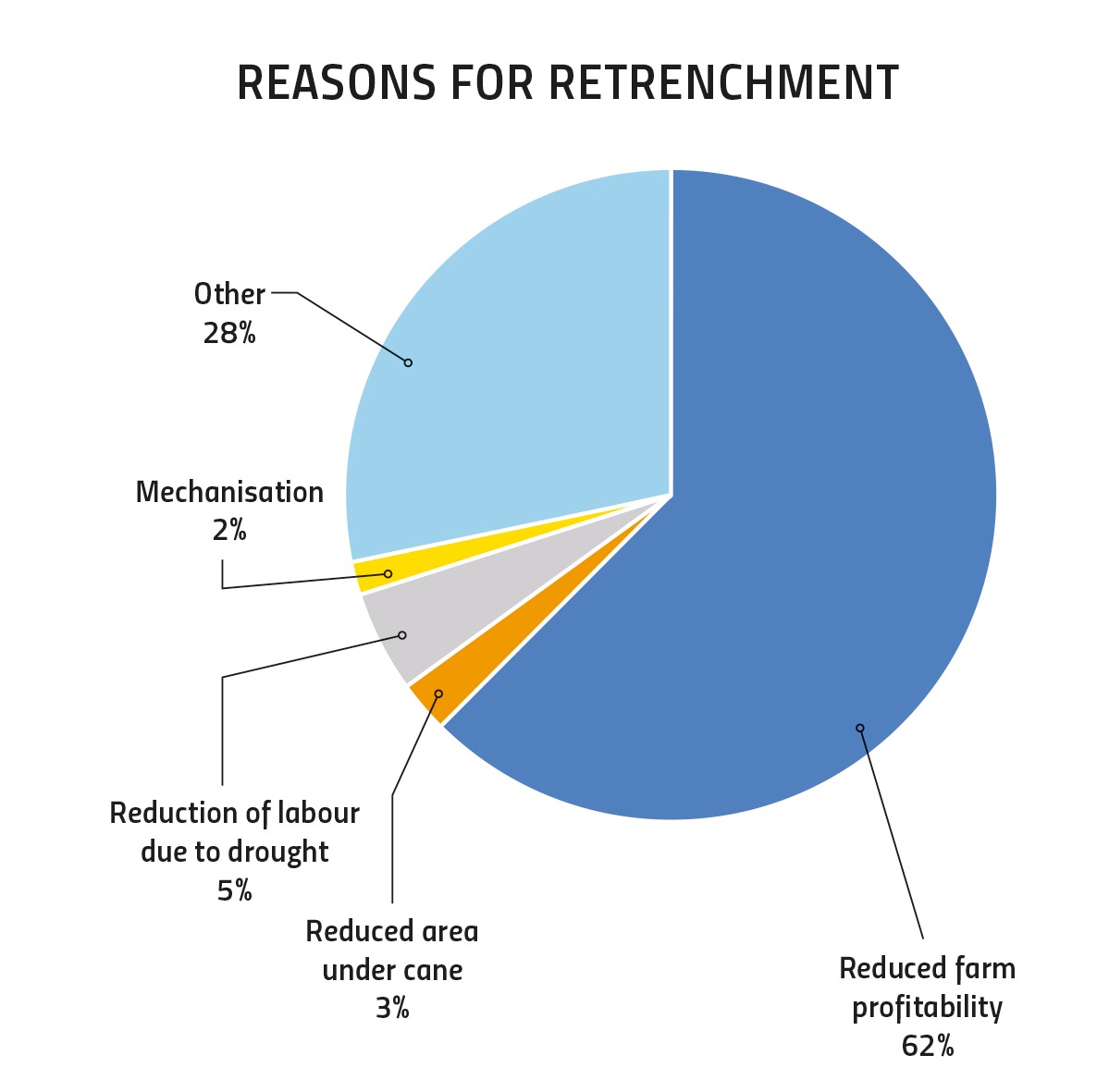 The reasoning provided for the retrenchments spoke directly to the situation we see in the Red Area Graph data. Sixty two percent (62%) of the growers in the sample stated that reduced farm profitability was the reason for these retrenchments. This is unfortunate but when farm staff costs are 30% of the total costs of farming it is understandable that growers try and reduce that cost to remain profitable. The issue also is that in the rural areas general farm staff are unskilled and therefore do not have many other options. Growers may keep semi-skilled or skilled labour such as drivers or other operators in these times as there is a constant skills shortage.

The drought, imports and policy shocks in the form of the HPL have contributed to the perfect storm which have pushed growers to the financial tipping point. This point has a knock-on effect throughout the rural economy, firstly through the two economic factors of production namely, capital and labour. As we see over time, capital is being reallocated to other crops or land uses and labour has also started to feel the effect of the tipping point shown in the recent data collected from LSGs. This cannot be taken lightly in a country where the creation and sustainability of the positive and productive environment is the only way to ensure growers can produce and employ people in rural areas.

Richard Nicholson is Manager of Economic Research at Canegrowers