The Sugar No 11 October 2018 contract came under significant pressure during the month of July with prices trading below the 11.00 US c/lb mark on numerous occasions. The front month contract traded from 12.25 US c/lb at the end of June 2018 to 10.97 US c/lb on 19 July 2018.  The sharp decline in prices can be attributed to the following:

While Brazilian producers have been aggressively hedging their positions on the back of the weaker Real, the dry weather that has plagued the 2018/2019 crop has continued to persist. According to the latest Kingsman reports, in CS Brazil the weather stayed extremely dry for the first half of July, with all five main cane growing states receiving almost no rain.  According to this report, between the official beginning of the new season April and July rainfall in CS Brazil was 50.2% below the historically average. The lack of rain could ultimately result in agricultural yields suffering a significant drop in second half of the season with a high probability of a sudden death of the current crop. It is also suggested that the current dry weather in Brazil is expected to have a lasting effect on yields for next year’s crop. Cane crush data released by Brazilian Industry group, UNICA showed a 14.32% reduction in total sugar production to date. On an April/ March crop basis, Brazilian CS mills are estimated to crush 550 mmt of cane this season which is a massive reduction compared to the 590 mmt cane estimate at the start of the season. 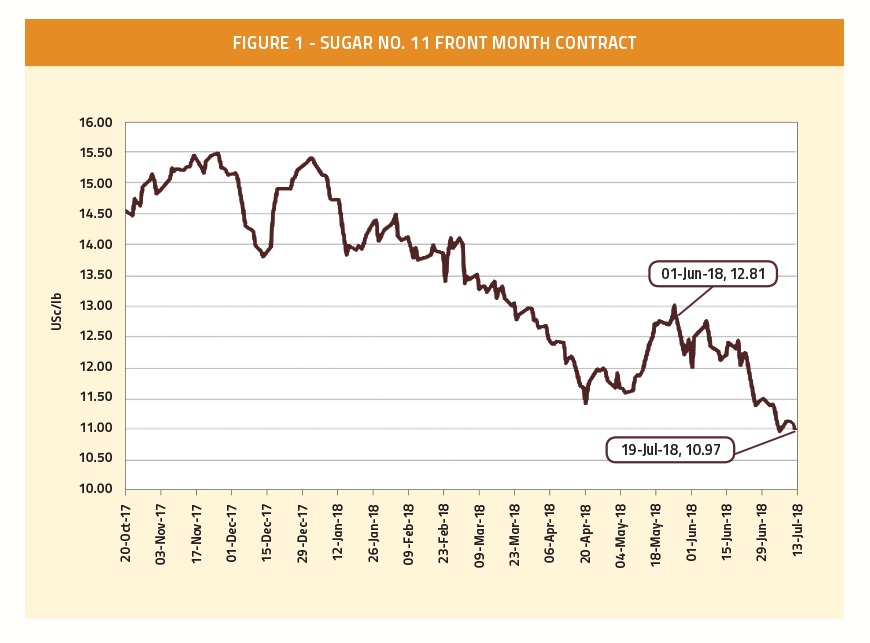 While the Brazilian 2018/2019 crop has been revised down sharply, the market will have to brace itself for a bumper crop from the world’s second largest producer India.  According to industry body ISMA, India’s sugar production for the 2018/2019 season (October-September) is expected to increase by 10% to reach a new record of 35.5 mmt. This would see an increase of 3.3 mmt against the numbers posted in the 2017/2018 season. Production in the key state of Uttar Pradesh is estimated to increase to 13.5 mmt in the 2018/2019 season from 12.05 mmt in the 2017/2018 season. Production in Maharashtra, the country’s second largest sugar producer, is pegged higher at 11.5 mmt for the coming season compared to the 10.71 mmt produced in the 2017/2018 season. According to ISMA, the increase in sugar output can be attributed to increase in acreage and yields from the cane and a normal monsoon rainfall. In other news out of India, the government announced the cane price payable by the industry for the 2018/2019 season. The Fair and Remunerative Price (FRP) for cane has been set at Indian Rupees 2 750/mt which is an increase from the Indian Rupees 2 550/mt paid out in the previous season.

The 2018/2019 campaign did not get off to a flying start in Europe, mainly due to the weather in March and April which was unseasonably cold and wet. This resulted in sowing delays by several weeks in the main sugar beet producing regions. After the wet and cold, the weather was relatively warm in the weeks following planting, which boosted beet development and raised hopes that this would offset the effects of late sowing. The weather has since deteriorated with the current dry conditions starting to raise serious concerns among the beet growers for the 2018/2019 crop. Kingsman estimates EU sugar production for the 2018/2019 season at 20.325 mmt down from the 21.385 mmt tons produced in the 2017/2018 season.

The Commerce Ministry of China reported last week that it intends to expand the list of countries which must pay full tariffs on sugar imports for 1 August 2018. This announcement comes a year after the Chinese Ministry introduced hefty penalties on top growers including Brazil and Thailand, while affording other countries, including South Africa, an attractive discount on duties payable. The extra duties on sugar imports will cover all countries, including India, Vietnam, Laos and Myanmar.

While the bull in the room is riding on the back of the dry weather in Brazil and the slight reduction of the European crop for the 2018/2019 season, the market is still very much in bearish territory. The global surplus stocks continue to weigh on the market and record high production forecast for India in the 2018/2019 season is most likely to add to surplus stocks. The market still remains in carry, with the March 2019 contract trading at a 72 point premium against the front month October 2018 contract. The huge potential availability of Indian exports and continued Brazilian Real weakness present clear risk to the downside for market in the short to medium term.

Geran Ranganthan is the
Export Administration Manager at SASA