Globally, sugarcane is a major feedstock for renewable bioethanol production for use as a transportation fuel. Other feedstocks include crops such as corn, wheat and cassava. Ethanol for fuel can be used for blending to reduce petroleum use and as pure ethanol (85 to 100% ethanol) which can be used in flexi-fuel vehicles.

Ethanol blending represents a significant foreign exchange saving for countries which import part or all of their liquid fuel, but have the option to diversify their fuel blend using ethanol produced from sugarcane. The challenge lies in implementing an enabling ethanol programme which includes securing the buy-in and support of petroleum companies, being the dominant industry for road fuel distribution. A drop in volume of ethanol blending would increase the surplus of petroleum on the books of oil companies.

Despite this challenge, the need to diversify the sugar industry and find alternative uses for sugarcane, is an imperative to support the sustainability of the sugar industry. An un-diversified industry, continues to be dependent on the sugar import parity protection afforded to the industry by government and negotiated free trade agreements.

Some benefits of fuel ethanol use

Ethanol production is increasingly gaining favour, in the midst of a world sugar surplus, low sugar prices and higher oil prices. In sugar-ethanol producing countries like Brazil, as local petrol prices escalate, consumers are increasingly opting to power their vehicles with ethanol, increasing the allocation of cane to ethanol. Inclusions or blending of ethanol with petrol is usually a 5% blend (E5) or 10% blend (E10), however Brazil has shown a blend rate of up to 27% without detrimental impact on vehicles.

Contradictory many multinational companies have already indicated their intention to substitute their car fleets with electric powered vehicles e.g. UK government 2040 target. However the realities for such conversions to be realized in developing countries is likely for the much more distant future.

Globally, fuel ethanol production capacity projections for 2018 and 2019 are estimated to grow. This is mainly as a result of mid- and long term prospects for demand in North and South America and parts of Asia.

Production capacity is set to rise by ~1.3 billion litres to 141.6 billion litres by the end of 2018 and may rise by further 1.5 billion litres in 2019 (~143.1 billion litres). Growth in capacity can be attributed to a combination of idled capacity brought back online (such as the case with Brazil) and green and brownfield investments.

Promisingly, during the next decade, the fuel ethanol market can be expected to grow a rate of 1.5 -1.7% a year with the focus of supply moving away from the US and EU to countries like Brazil, China and India.

Furthermore, across the sub-Saharan African region, the sugar industry should seek to increase ethanol offtake from the European Union (EU). Least developed countries under the Economic Partnership Agreement (EPA) should receive zero duty for import of ethanol into the EU1. More recently, the US has been the biggest supplier into the EU. In 2016, South Africa as part of the SADC-EPA agreement obtained a quota of 80 000 tons of ethanol. 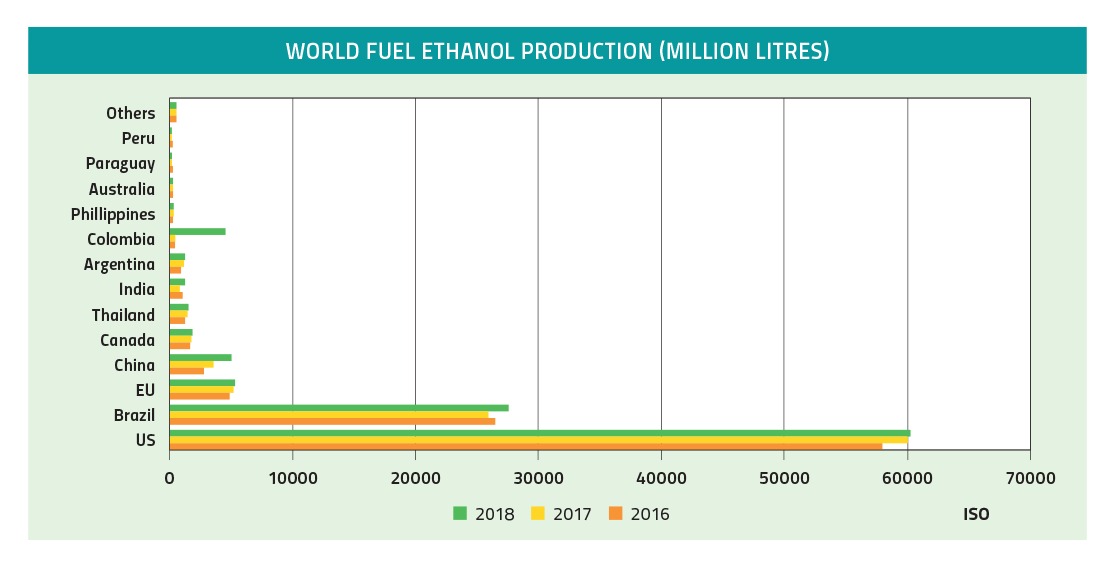 1 As of May 2018, the standard import duty rate on ethanol imports into the EU is 192 EUR per cubic meter ~116 EUR per ton of sugar assuming an equivalence factor of 1.65 MT of sugar per cubic meter of anhydrous ethanol.

Brazil fuel taxation and ethanol trade has supported local demand, with the RenovaBio programme planned for implementation 1 January 2020; potentially transforming the way the sector operates. The objectives of the RenovaBio programme includes supporting achievement of the Paris Agreement goals, promoting an adequate expansion of biofuels in the energy mix of the country and ensuring predictability in the fuels market inducing energy efficiency gains and reducing emissions of GHG in the production, commercialization and use of biofuels. Using emission reduction targets2 and emission credits, incentives for low carbon intensity fuels will be created which could lift demand to over 40 million cubic metres by 2030. Hydrous ethanol is now consistently looking more attractive than sugar production, triggering an increase in the allocation of cane to ethanol. This can also be attributed to the demand for transportation fuels picking up as the country moves out of recession, firmer international crude oil prices and liberalized petrol prices. Brazil will likely buy less from the US after the introduction of the tariff rate quota and the improved production outlook for ethanol.

USA E15 may help to reduce surplus. Negotiations on a revised renewable fuel standard could change offerings of retailers relating to E15. In 2017, biofuels displaced approximately one million barrels per day of refined petroleum product. Exports remain an important part of the sales mix for US distillers.

Africa as a continent offers significant potential for ethanol production and use. For example Kenya, with pro-ethanol policies in place since 2010 but are currently not blending due to infrastructure constraints related to refining and blending as well as limited expansion in feedstock production. Kenya being a significant importer of finished petrol provides a foundation for ethanol use. According to US Grains Council, US ethanol exports to the United Arab Emirates are being blended into petrol and shipped to East African markets.

The EPA proposal in September 2017 and again recently, for ethanol exports to be counted against the renewable fuels standard targets, added one billion gallons for renewable identification number3 generation, prompting prices to fall.

Europe could see a substantial surplus this year and possibly in 2019 as well. Beet ethanol plants in France, Germany, the UK and the Czech Republic are expected to continue working at capacity, absorbing 12 million tons of sugar beet, almost twice the amount processed in 2016/17.

Free trade accords and higher blends in Mexico, promoting the nation-wide use of E10 and the gradual liberalization of fuel prices – opening a market of 4 million cubic metres of ethanol a year.  Also, making importing product from the US much easier.

Japan government announced that it would allow the use of US corn ethanol in the production of ETBE4, which had been reserved for cane ethanol from Brazil.

Expansion in Canada continues on a growth path. Obligations made under the Paris Accord, includes 30 mega-tons of annual reductions in GHG emissions by 2030. The Canadian industry is expecting that a system similar to California’s low carbon fuel standard will be introduced predicting a rise in fuel ethanol consumption to below 6 million cubic metres by 2025 and 9 million by 2030.

In Asia, output grew on the back of higher volumes offered to the oil majors in India and growing production in Thailand. Output can be expected to continue growing mostly because of China.

China - the Chinese government intends to have a 5% ethanol blend programme by 2020, requiring about 19 million cubic meters of ethanol. This has resulted in a number of new capital investment projects within the domestic sector, also acknowledging that imports may be needed with the scale of the programme. The decision to raise the import tariff on US ethanol will make it harder to reach the target.

India is Asia’s number two producer with production expecting to rise in 2018 and 2019, exceeding 1 billion litres, with bumper sugar and molasses outputs. The Indian government is undertaking new efforts to lift the ethanol blend to E10 by 2025, expanding the range of feedstock available for ethanol production beyond sugarcane molasses to include sugarcane juice.

Thailand fuel ethanol production is expected to grow by more than 3%. The Thai government remains committed to expand the role of renewables in transport and plans to ban the use of ethanol blends below 20% by 2027.

Pakistan production may be behind, however Pakistan suppliers will continue to dominate the export markets in Asia, with competition from Australia, Cambodia and Vietnam.

2 591 million tonnes CO2eq reduction.
3 Renewable identification number prices continue to be a good indicator for the direction of the public policy debate.
4 Ethyl tert-butyl ether (ETBE) is commonly used as an oxygenate petrol additive in the production of petrol from crude oil. 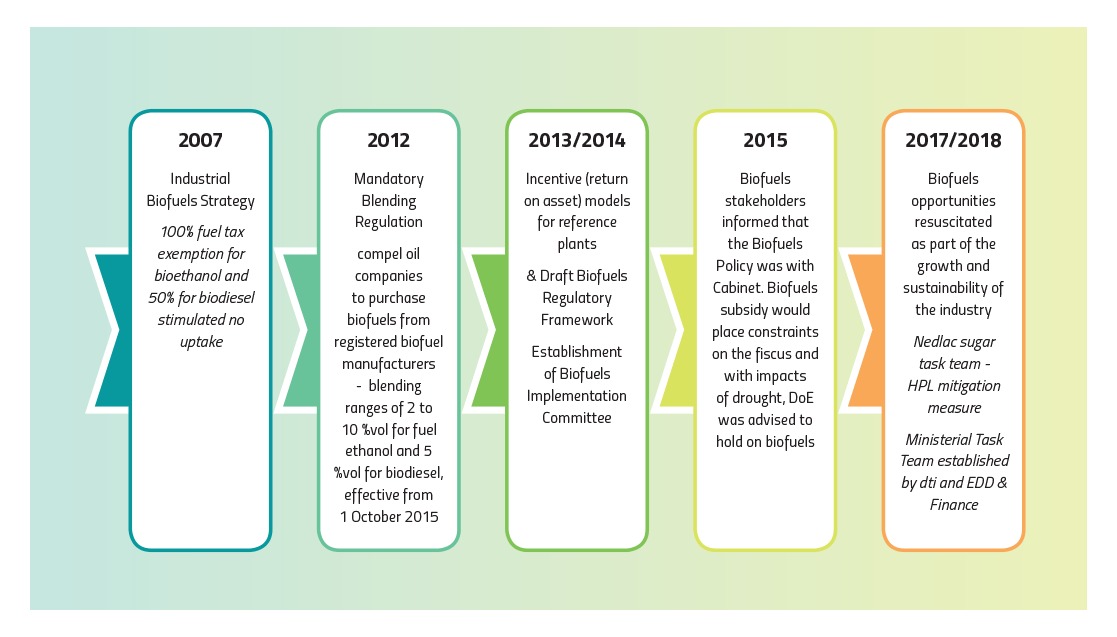 Ethanol developments in South Africa - more than a decade ago

South Africa is a net importer of liquid fuels and currently more than 3 billion litres of refined product has to be imported due to insufficient domestic refining capacity, as well as refinery outages and unplanned shutdowns. The South African sugar industry is a net exporter of sugar, at a price below the cost of production because of the distorted global market. However, excess sugar can be converted into bioethanol for fuel blending. There is also potential to cultivate new area under sugarcane specifically for fuel ethanol production. An estimated 7% blending in the national fuel pool could be realised from brownfields and greenfields investments from the sugar industry.

More recently, the Department of Agriculture has also promoted the piloting of ethanol using sugarcane as the feedstock in South Africa, as an opportunity to support transformation and development of black small scale growers.

SASA in its policy submissions to the Department of Energy has emphasised the relevance and importance of diversification in the SA sugar industry, requesting for the inclusion of cogeneration and biofuels programmes in our countries energy policies, specifically updates to the Integrated Resource Plan and the Integrated Energy Plan. Exclusion is detrimental to the future of the renewable energy opportunities in South Africa.

Dr Marilyn Govender is  the Natural Resources Manager at SASA

US Grains Council. September 2017. Works To Expand Ethanol Use In Africa As Part Of Global Demand Strategy.