The New York sugar futures contracts have gained significant momentum during the first few weeks of the New Year. The front month contract, March 2019, reached an intra-trading high of 13.27 US c/lb on Wednesday 16 January 2019. The market settled at 13.16 US c/lb on this day which represented a massive 147 point rally since the lows of 11.69 US c/lb posted on 03 January 2019. 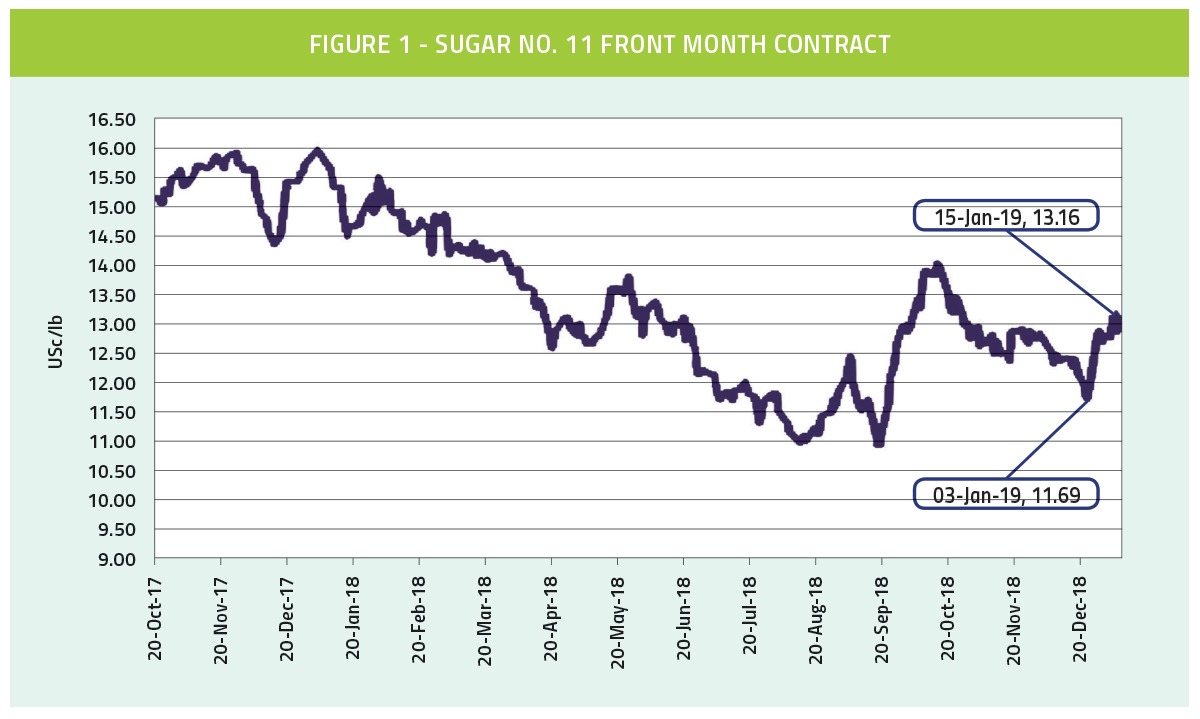 During December 2018 the speculators were back in selling mode, increasing their short position from 37 000 lots at the end of November 2018 to 60 800 lots in the middle of December 2018. With no Commitment of Traders (COT) report released due to the partial US government shut down, it is estimated that their net short position was in excess of 100 000 lots at the end of 2018. According to some trade houses and research desks the start of 2019 has seen the speculators move back into buying mode. Buying patterns indicate that this is short covering. All of these assumptions will be confirmed once a COT report is released.

The recent bullishness in the Brent Crude market has also contributed to the uptick in prices. Crude prices increased from USD 54.91 per barrel to reach a high of USD 61.68 per barrel in January 2019. Changes in the Brent Crude market have a direct influence on ethanol parity, which is currently estimated at 13.79 US c/lb (No 11 Equivalent). This represents a 62 point increase from the December 2018 estimate of 13.17 US c/lb. 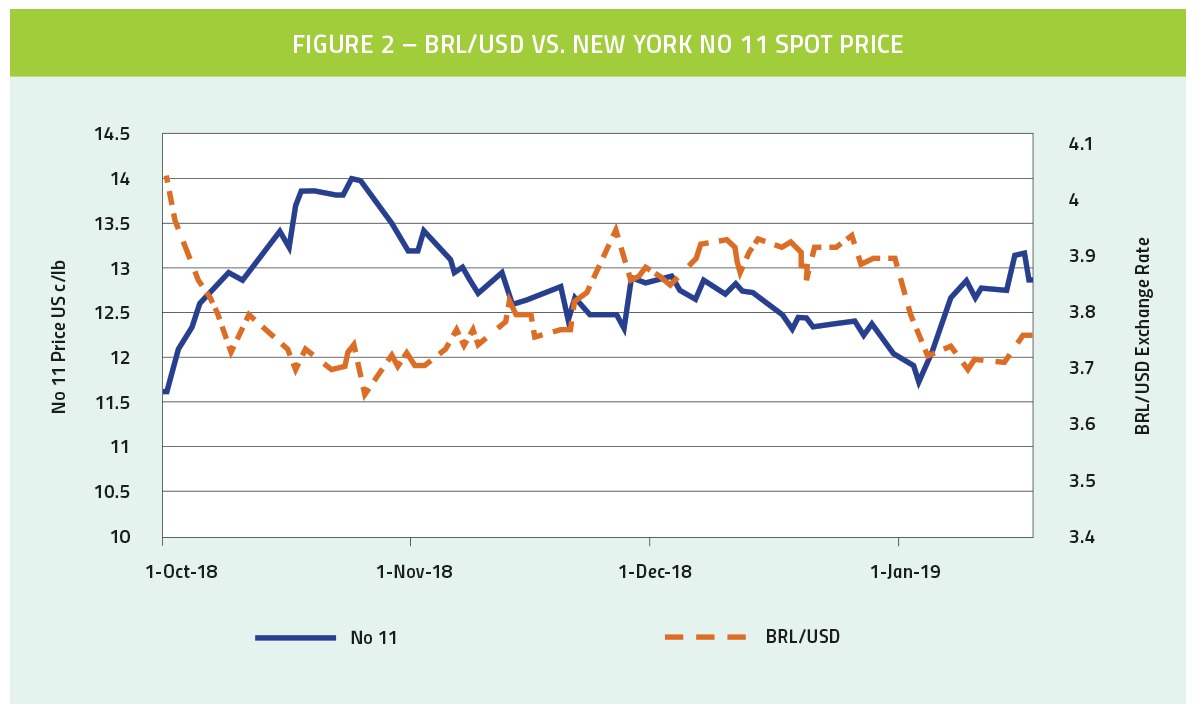 According to recent Citi Bank reports, the Thailand crop for the 2018/2019 season is making excellent progress. The cumulative quantity of sugar cane crushed up to 8th January 2019 was 36.4 mmt, which was 37% higher year on year. The early start to the crop for the 2018/2019 season was one of the key reasons for the improved year on year numbers posted. The current dry conditions in Thailand is also favourable for crushing.

The Indian harvest is also performing well. According to recent Kingsman reports, the key growing region of Maharashtra shows a strong rise in volume of cane crushed. Between the start of the 2018/2019 season, 1 October 2018 and 10 January 2019, 49.8 mmt of cane were crushed which represented an 11.6% year on year increase. This resulted in sugar production of 5.3 mmt, which increased by 14% year on year. Indian sugar production for the 2018/2019 season is estimated by Kingsman to be in the region of 31.3 mmt.

There has been a lack of exports out of India with only 1.4 mmt of the 5 mmt quota contracted to date (according to Citi Bank). The sluggish pace of Indian exports is surprising given the current export parity figure of 12.00 US c/lb, taking into account the export subsidy. Given the current spot prices, why would India not export sugar? 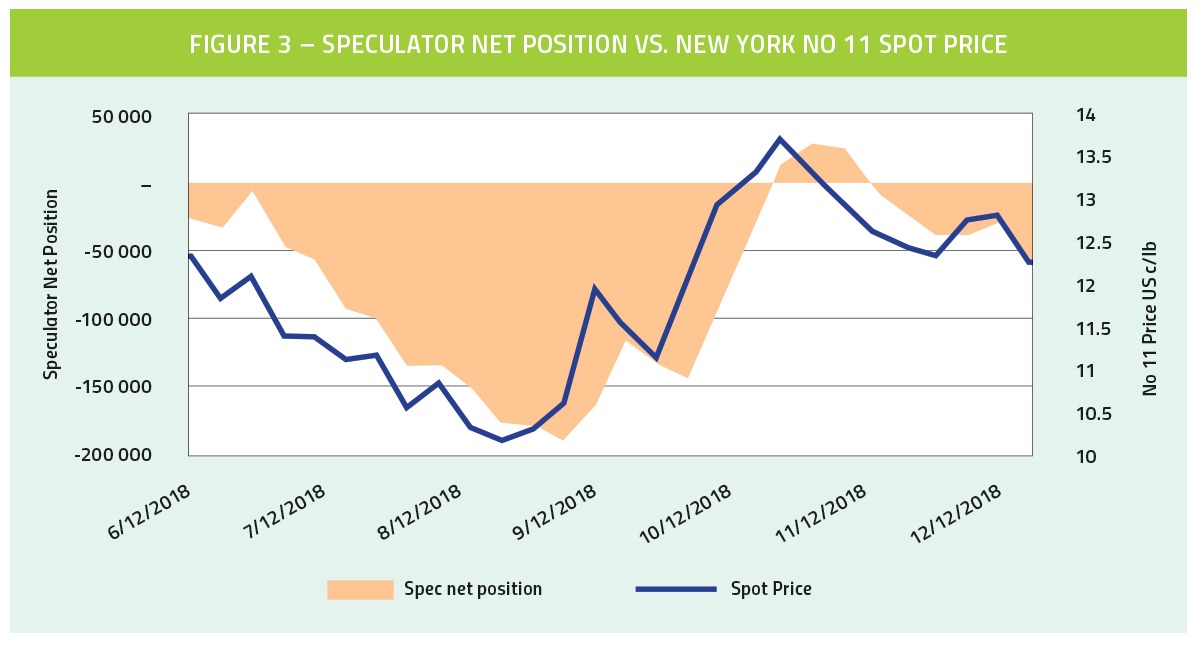 Recent reports out of India suggest that the local minimum selling price will shortly be raised from 29 000 INR/MT to 32 000 INR/PMT by the Indian government. This may be dissuading millers to export for fear of missing out on higher prices. Should the new minimum selling price be approved, export parity would raise to over 13.70 US c/lb, which make exports at this stage unviable.

In January 2019, the Trans Pacific Partnership-11 (TPP-11) has taken effect for six countries which include Japan and Australia. Australia are currently the largest supplier of sugar to Japan, the TPP-11 allows Australian sugar to now enjoy a further levy of about 1 500 Yen/mt, which puts Australian sugar at a distinct advantage to all other origins. This levy would be in addition to the existing Australia-Japan bilateral trade agreement which allows the Australians the concession to ship raw sugar into Japan with a Max Polarisation of 98.99. Raw sugar imports from other countries into Japan require a Max Polarisation of 97.99.

The recent rally in the market was largely driven by speculator short-covering rather than significant changes to the world sugar fundamental picture. In the coming weeks and months, the market will face a number of questions:

During the past few trading sessions the market has seen higher ground encountering some solid scale producer selling which suggest that the market is entering a period of consolidation after 2 weeks of impressive prices. With the lack of a significant fundamental shift over the past weeks, the market will once again be at the mercy of the speculators, who pose potential downside risk in the short to medium term should they get back into selling mode. It seems as though the only constant in the Sugar Market at the start of the New Year remains volatility.