Above: Students celebrating their success with SITFE Chairman Tim Murray.

The Sugar Industry Trust Fund for Education (SITFE), which is administered by the South African Sugar Association (SASA), held a successful media briefing on 1 February 2019 at the Sugar Terminal to announce this year’s 41 bursary recipients from the cane growing provinces of KwaZulu-Natal and Mpumalanga.

“Some of these outstanding youngsters are orphans while others are sons and daughters of domestic workers, farmworkers, security guards and unemployed parents who survive on state grants. Their adversity notwithstanding, they have defied the odds and aced their exams. As SITFE, we cannot let such academic brilliance go unnoticed. It is our duty to contribute towards education and grow the economy of the country through educated and skilled youth,” said Murray. Students reciprocated, saying the sugar industry had made an immense contribution towards their careers and life in general through its financial assistance. 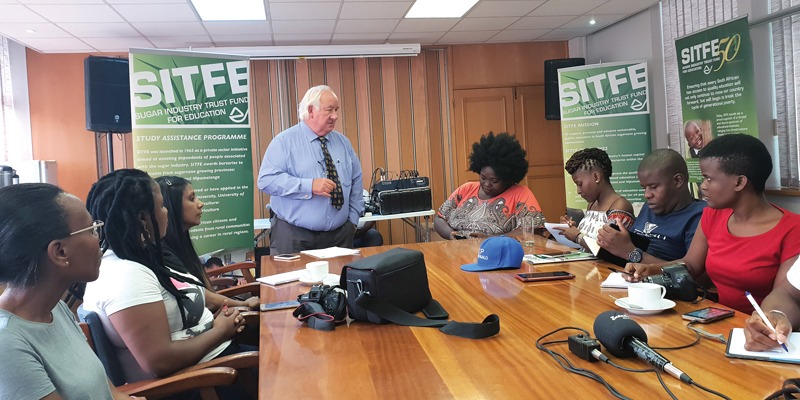 One of this year’s recipients is 18-year-old Lethokuhle Hlongwane from Pietermaritzburg. She lost both her parents. Despite this personal tragedy, her determination has seen her pass her matric with flying colours and earning herself a place at the University of KwaZulu-Natal to study environmental sciences. “Hers is such an inspirational story to all of us. We are very confident that she will be extremely successful in her field of study and work,” said Murray.

SITFE annually awards 41 new bursaries to tertiary students. For the 2018/2019 season, this relates to approximately R3.5 million. The SITFE bursary, valued at approximately R150 000, covers 100% of tuition fees, books, meals, and accommodation for the entire duration of the student’s undergraduate course. SITFE is proud to include among its alumni a number of South Africa’s prominent leaders including Minister of Transport, Dr Blade Nzimande; Judge President of the Western Cape, John Hlophe and KZN MEC of Health, Dr Sibongiseni Dhlomo. Minister of Cooperative Governance and Traditional Affairs, Dr Zweli Mkhize and his wife Dr May Mashego also received assistance from SITFE for their high school education.

SITFE is committed to improving the quality of education within the rural sugarcane growing areas of KwaZulu-Natal and Mpumalanga. For 54 years, SITFE has dedicated funds and resources to a variety of initiatives including school building projects, early childhood development programmes, training academies for the disabled, teacher training programmes and Maths, Science and English interventions. Since its inception in 1965, SITFE has awarded more than 10 200 bursaries to tertiary students from the sugarcane growing provinces. The Trust Fund is continuously reassessing its projects and programmes in order to stay relevant to the particular needs of the education system.