The South African Sugar Association (SASA) has expressed concern over the increase in the Health Promotion Levy (HPL), commonly known as “sugar tax”, as announced by Finance Minister Tito Mboweni in his Budget Speech on 20 February 2019.

This development compounds the situation for the sugar industry which is already facing serious challenges such as worrying volume of imports displacing the local market.

“The HPL has already had a significant impact on the volumes of refined sugar sales in the local market and a consequent increase in the exposure of the sugar industry to the loss-making export market – it is estimated that the impact represents a decline in local demand for sugar of more than 200 000 tons per annum (reducing industry revenue by approximately R1 billion per annum),” said SASA Chairperson Hans Hackmann.

It is estimated that the impact represents a
decline in local demand for sugar of approximately 200 000 tons per annum (reducing industry revenue by approximately R1 billion per annum).

The increase translates to roughly a 1.14% increase in the price of a sugar sweetened beverage, over and above the 11.5% rate applied when the tax was first levied last year (2018).  As from 1 April 2019, a two litre soft drink will cost the consumer an extra R2.93.

According to SASA Executive Director Trix Trikam, since the gazetting of HPL on 1 April 2018, SASA assesses that at least 244 900 tons have been lost to beverage manufacturers reformulating to chemical sweeteners in response to the tax. “With the proposed increase in the HPL from 1 April 2019, further reformulation is anticipated. It is very likely this will result in job losses in the near term.

The Bureau for Food and Agricultural Policy study (commissioned by SASA and conducted in 2017) estimated that the direct job losses would be most evident in the growing sector, and most prominent in the small-scale black growing portion of this sector,” he added.

Hackmann said SASA found it regrettable that the implementation of mitigation measures, as recommended by the Nedlac Task Team (which was established as per the resolution of Parliament’s Portfolio Committee on Finance) comprising all relevant stakeholders, with regards to the HPL had been delayed. The industry is currently facing a number of serious challenges threatening its sustainability and survival. Therefore, the need for the industry to pursue diversification has become even more urgent.

“The impact of the HPL on the sustainability of our industry needs to be addressed urgently. We will seek engagement with government and Parliament on the way forward to discuss the process of expediting the implementation of mitigation measures,” said Hackmann. The mitigation measures include the raising of the import duty on dumped sugar to a more appropriate level (via the Dollar-Based Reference Price formula or any other more appropriate mechanism).

The Portfolio Committee on Trade and Industry recently resolved to write to Minister Rob Davies, asking him to intervene as a matter of urgency. The Committee resolution calls on the minister to intervene in whatever way to help the industry. Committee Chairperson, Joanmariae Fubbs, said although the sugar tax issue did not fall under their jurisdiction, they would appeal to Minister Davies to speak to his Cabinet colleagues about it. Meanwhile, the Department of Trade and Industry is also working with the industry to come up with measures to get out of the danger zone. 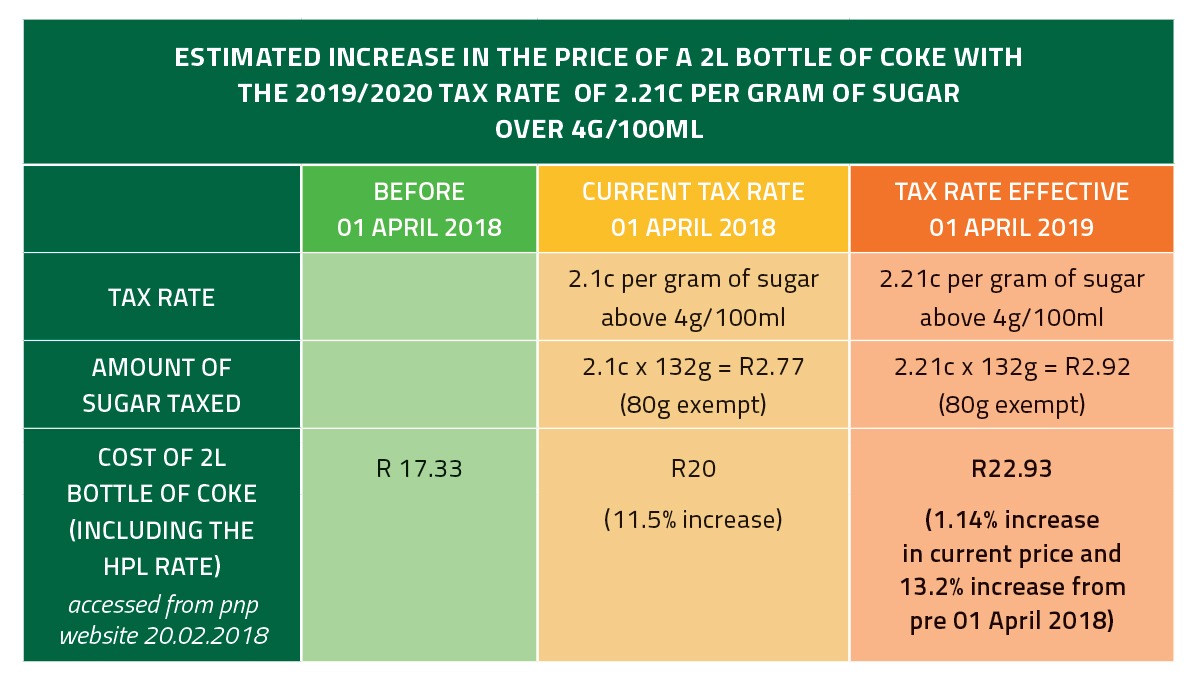 Past experience shows that when Parliament, government and the industry work together, more can be achieved. Last year, the Portfolio Committee on Trade and Industry (which has been guiding and helping the sugar industry on its transformation journey), President Cyril Ramaphosa, Trade and Industry Minister Rob Davies, Economic Development Minister Ebrahim Patel, and Agriculture, Forestry and Fisheries Minister Senzeni Zokwana came to the rescue of the industry when it applied to the International Trade Administration Commission of South Africa (ITAC) for an increase in the DBRP from $566 to $856. Eventually, ITAC increased the reference price from $566 to $680. Although SASA did not get the reference price it had applied for, the new tariff did bring much-needed temporary relief for the industry.

“We would have been worse off, had it not been for the interventions by the President, the Portfolio Committee on Trade and Industry, the Departments of Trade and Industry, Economic Development, and Agriculture, Forestry and Fisheries. We hope the same spirit will prevail, with the relevant stakeholders, when it comes to addressing the exigent issue of the HPL,” said Hackmann.