The figure above illustrates a summary of the key factors over the past five seasons that have been detrimental to grower revenue. Thereafter, each of these factors are briefly unpacked.

Numerous proverbs have been used to describe the South African sugar industry in the past few months and years. A perfect storm. A crisis. On its knees. In decline. A sour outlook. These highlighted many factors including, insufficient tariff protection, imports and the Health Promotion Levy (HPL). It is critical to understand that these and other key factors, are not mutually exclusive. They are intertwined and have combined negatively to leave most sugarcane growers at their financial tipping point.

Over 130 countries produce sugar, either from sugarcane or sugar beet. The world sugar market is essentially a dumped market, with unsustainably low prices mainly driven by various government interventions including subsidies, quotas and tariffs. Therefore, sugar prices are usually below the costs of production. 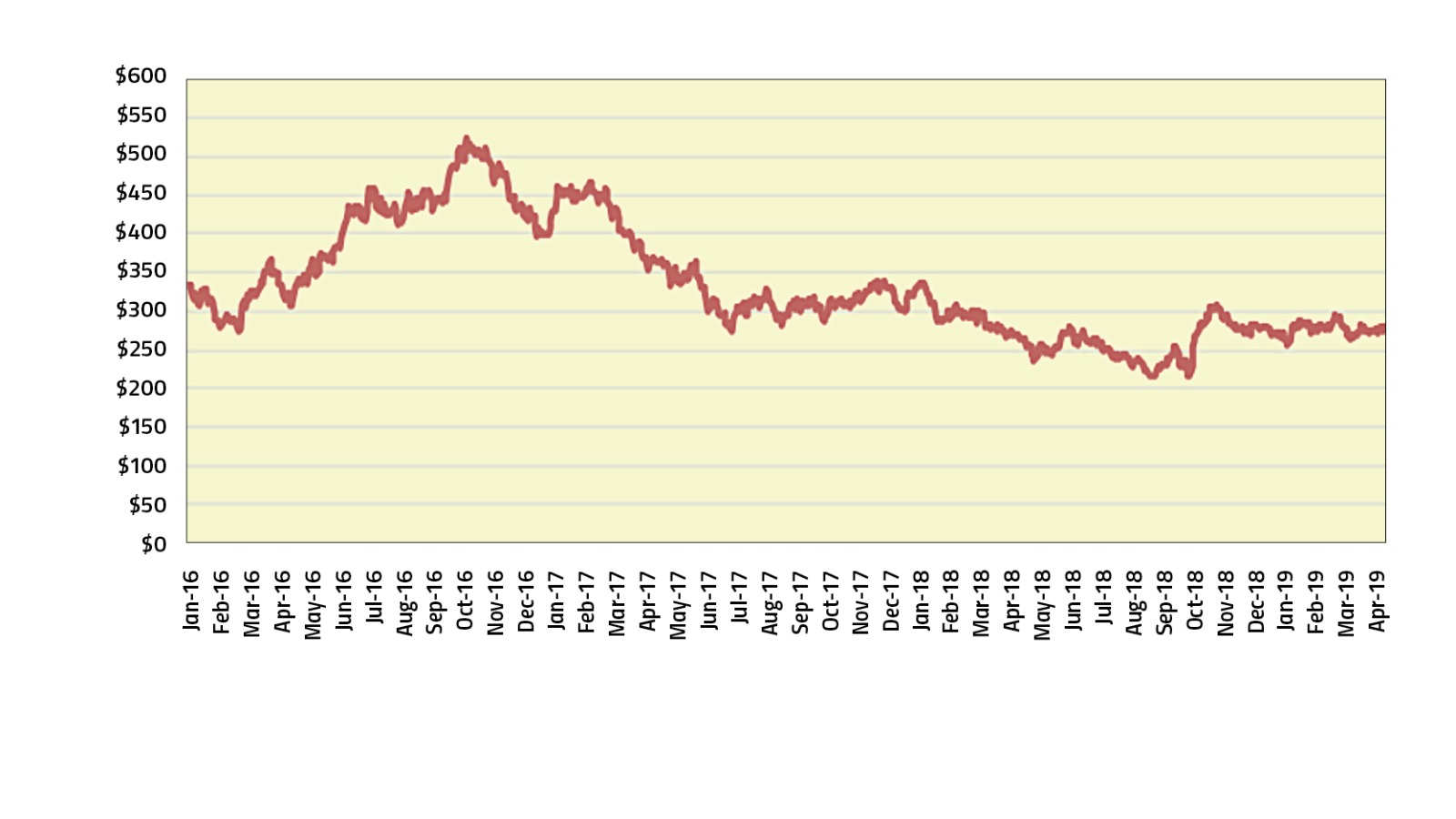 South Africa generally makes a substantial loss when exporting sugar. The loss has been exacerbated by raw sugar prices dropping around 45% since late-2016. Furthermore, the Rand has, on average, strengthened by about 12% over the same period. The low world prices and stronger exchange rate have almost halved expected export revenue per ton sugar in less than 3 years.

Surge in sugar imports forces local sugar to be exported

The much-needed calls for higher tariff protection are specifically for duty-paid imports. SADC sugar producing countries are currently allowed a quota total of about 45 000 tons duty-free imports into SACU. There is free trade access to sugar producing countries in SACU, namely South Africa and eSwatini. The graph adjacent shows the devastating volumes of needless reported imports into South Africa over the past three seasons. 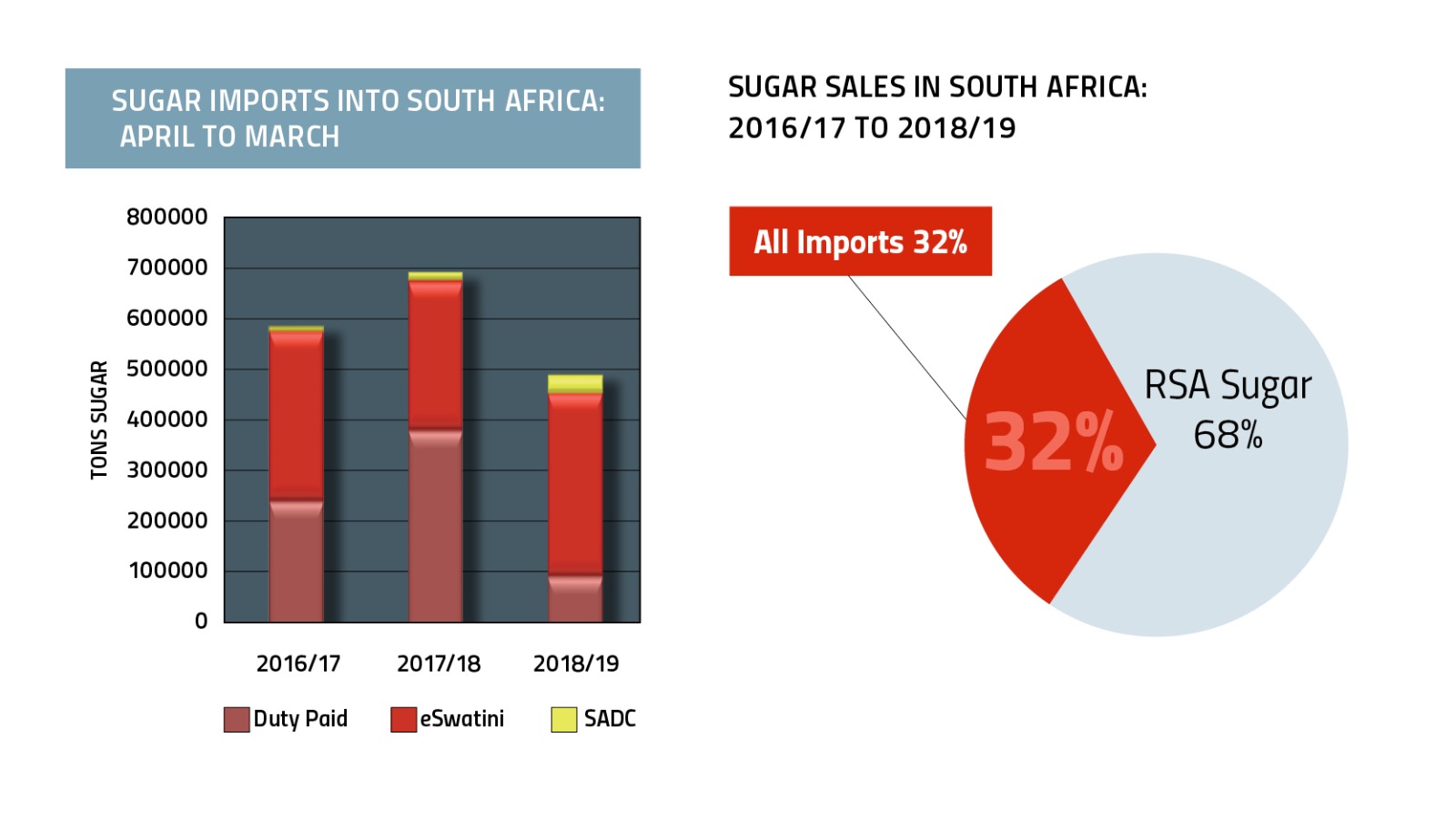 To capture the magnitude of the impact, the pie-chart above shows the percentage of local versus imported sales distribution. The red slice indicates the portion of local sugar that is unnecessarily sold to the world market (at prices below costs of production).

The threat of imports remains. Cane growers’ revenue is largely dependent on South African sugar sold into SACU, where prices have had to remain low to avoid further market share lost to imports.

The HPL was implemented from 1 April 2018 and increased by 5.2% on 1 April 2019. The level of the HPL is almost double retail sugar prices. Therefore, without any reformulation away from sugar, the price of sugar for the levied portion of most non-alcoholic beverages in South Africa almost tripled overnight on 1 April 2018. 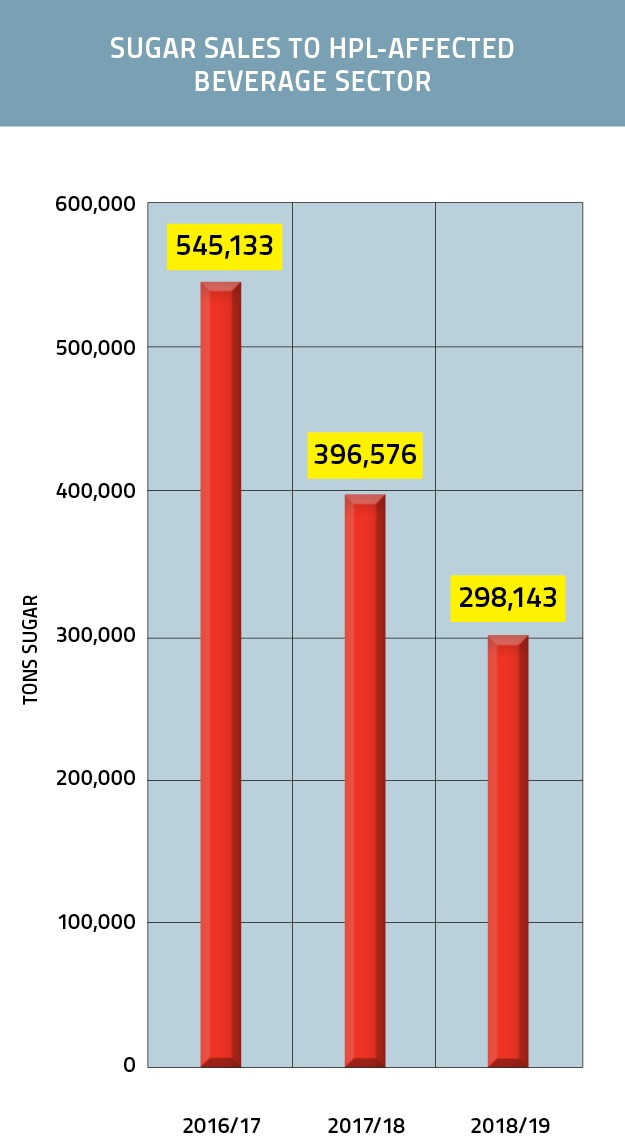 To maintain market prices and share, the sugar content in many HPL-affected products have been replaced by non-nutritive sweeteners. The reduced demand has been massive (refer to Figure adjacent), which has resulted in an additional 250 000 tons of sugar being sold on the world market. The drop in 2017/18 (before the HPL), can largely be attributed to the huge volumes of duty paid imports in 2017. In addition, further damage is likely to be experienced due to the 5.2% increase to the HPL.

In summary, grower revenue has evaporated over three years without their influence, driven by a combined impact of imports, HPL and low world prices.

On the other hand, key cane grower input costs have continued to rise significantly above inflation.

Labour contribute, on average, about 30% of cane grower costs. The minimum wage costs have increased substantially above-inflation in the past few years. The National Minimum Wage for farm workers increased 11% on 1 January 2019. And don’t forget that this increase came after the 52% increase in farm worker wages in 2013.

Furthermore, fuel prices continue to spiral and have increased by 32% since May 2016. Fuel and transport contribute, on average, about 15% of cane grower costs. In addition, accessing off-crop and overdraft finance is becoming increasingly difficult and costlier for cane growers.

The tipping point is within grasp

Overall, revenue has rapidly declined, and costs have considerably increased. Sensational – can be used to describe that cane growers are still in business. But, for how much longer?

The tipping point is near, and jobs have already been lost. A significant step change is needed. Urgently. Or the list of proverbs may change to those that revolve around large rural areas of a sugar industry that once existed.

What is needed and potential solutions?