Incorporating bioethanol into the country’s fuel ethanol mix will not only help revitalise the South African sugar industry but it will also achieve the country’s goal of reducing emissions through the use of a cleaner-burning fuel.

The local sugar industry has the potential to assist South Africa in meeting its target of reducing greenhouse gas emissions through the incorporation of fuel ethanol into the country’s national petrol pool, without affecting production for the local market. With global efforts of reducing the rate of global warming, carbon dioxide removal and low carbon technologies are gaining traction as mitigation measures to ensure global warming of 1.5°C or less is achieved by 2100.

Climate change impacts such as drought conditions and flooding have already been seen in South Africa. There is now a dire need for the sugar industry to play a role in climate change mitigation to help achieve national emission reductions and reduce the severity of potential future impacts of climate change. South Africans must have a pronounced interest in meeting the global warming limit of 1.5°C. As a developing country, South Africa is greatly affected by climate change impacts due to its effect on water and food security, health, human settlements, ecosystem services and infrastructure.

This article summarises the predicted impacts of climate change as well as the proposed mitigation and adaptation measures relevant to the South African agricultural sector indicated in the special report by the Intergovernmental Panel on Climate Change (IPCC). The IPCC published a Special Report entitled ‘The Impacts of Global Warming of 1.5°C above Pre-industrial Levels and Related Global Greenhouse Gas Emission Pathways’ in 2018’. The report stresses the importance of reducing CO2 emissions by highlighting the severity of climate change impacts if effective mitigation measures are not prioritised globally. At the Paris agreement in 2015, nations, including South Africa, had agreed to limit warming to 2°C.  A 2°C warming limit is now projected to lead to worse global and regional climate impacts hence the reduced warming limit of 1.5°C.

Key findings presented in the report

Global average temperatures have already increased by 1°C since the 2pre-industrial period of 1850 – 1900. The impacts of global warming on natural and human systems has already been observed and future climate-related risks will depend on the magnitude and rate of warming, geographic location, levels of development and vulnerability, and on the choices and implementation of adaptation and mitigation options. Future climate-related risks would be reduced by the improvement and fast tracking of existing, and the development of new, climate mitigation and adaptation measures.

Sugarcane is affected by climate change as temperature, precipitation and atmospheric carbon dioxide are key factors for sugarcane production globally. Any change in the climatic conditions in sugarcane production influences the population dynamics, life cycle duration and overall occurrence of the majority of insects, pathogen and weeds of sugarcane (Hussain, et al., 2018). 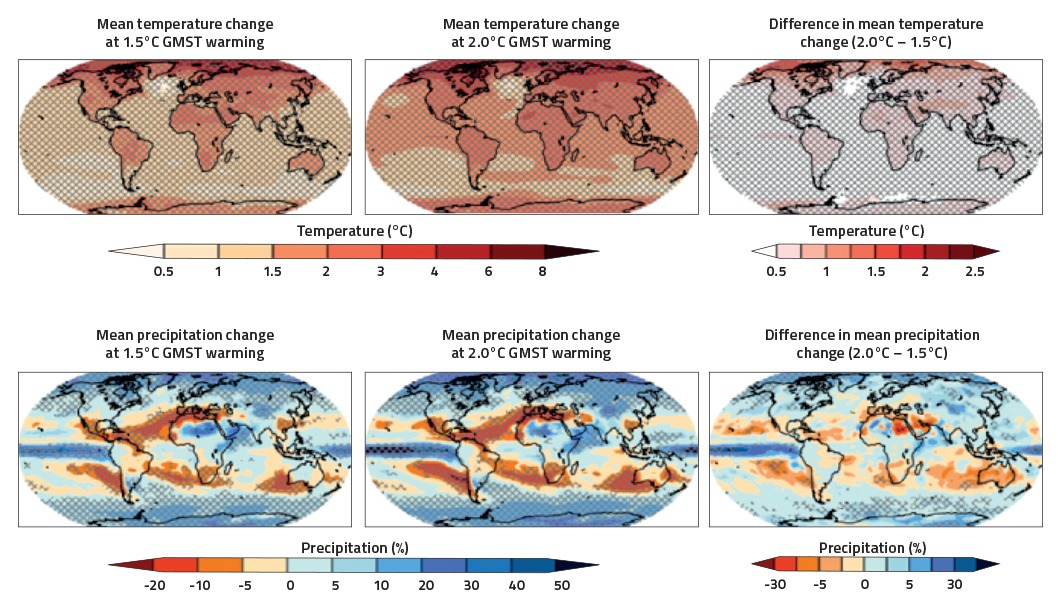 Limiting global warming to 1.5°C compared to 2°C is projected to lower the impacts of climate change on terrestrial, freshwater and coastal ecosystems and their ability to retain more of their services to humans. Climate-related risks to health, livelihoods, food security, water supply, human security, and economic growth are projected to increase with global warming of 1.5°C and increase further with 2°C.

Illustrated below are the impacts and risks at different levels of global warming for people, economies and ecosystems across sectors and regions.

The key elements are presented here as a function of the risk level assessed between 1.5°C and 2°C 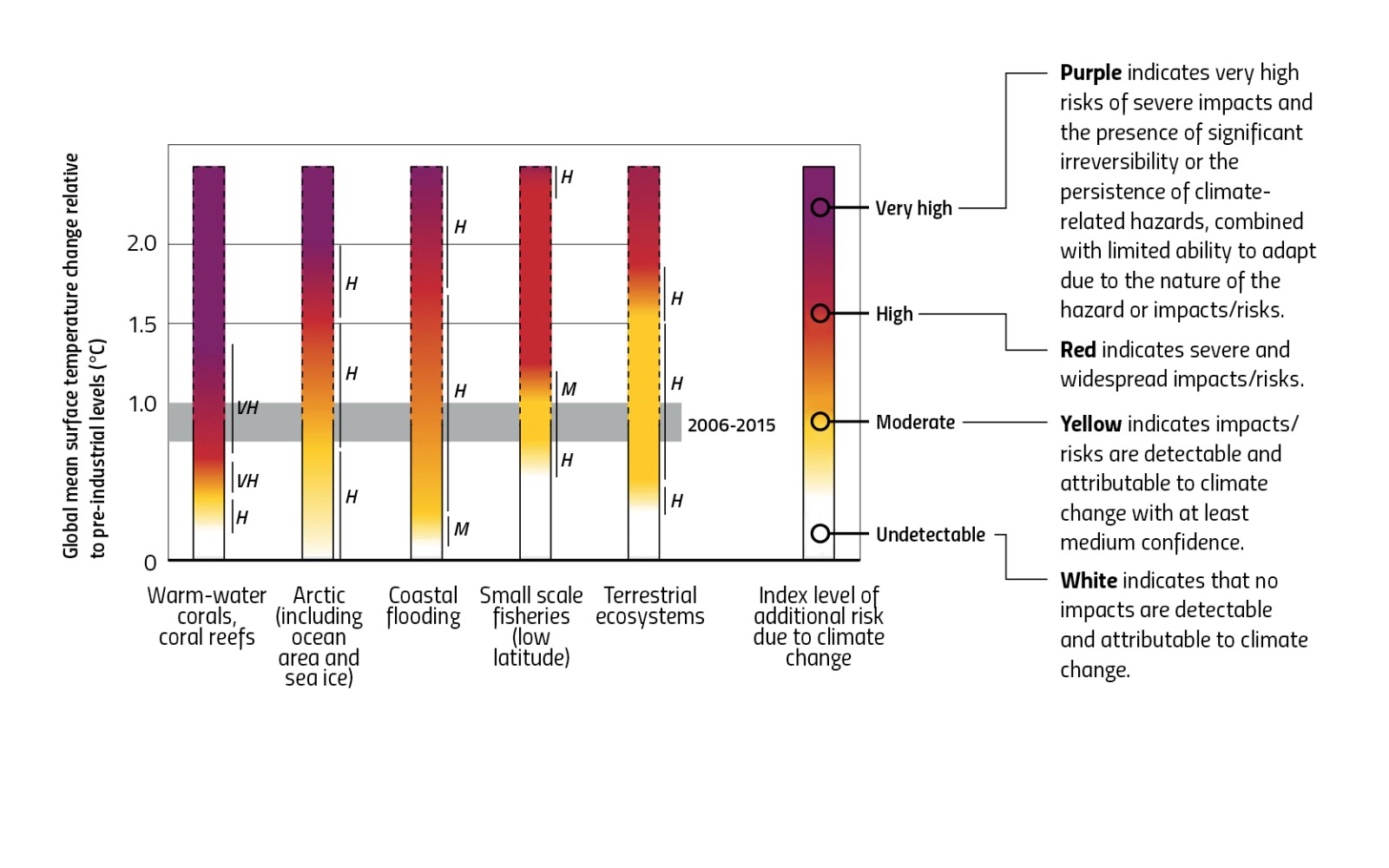 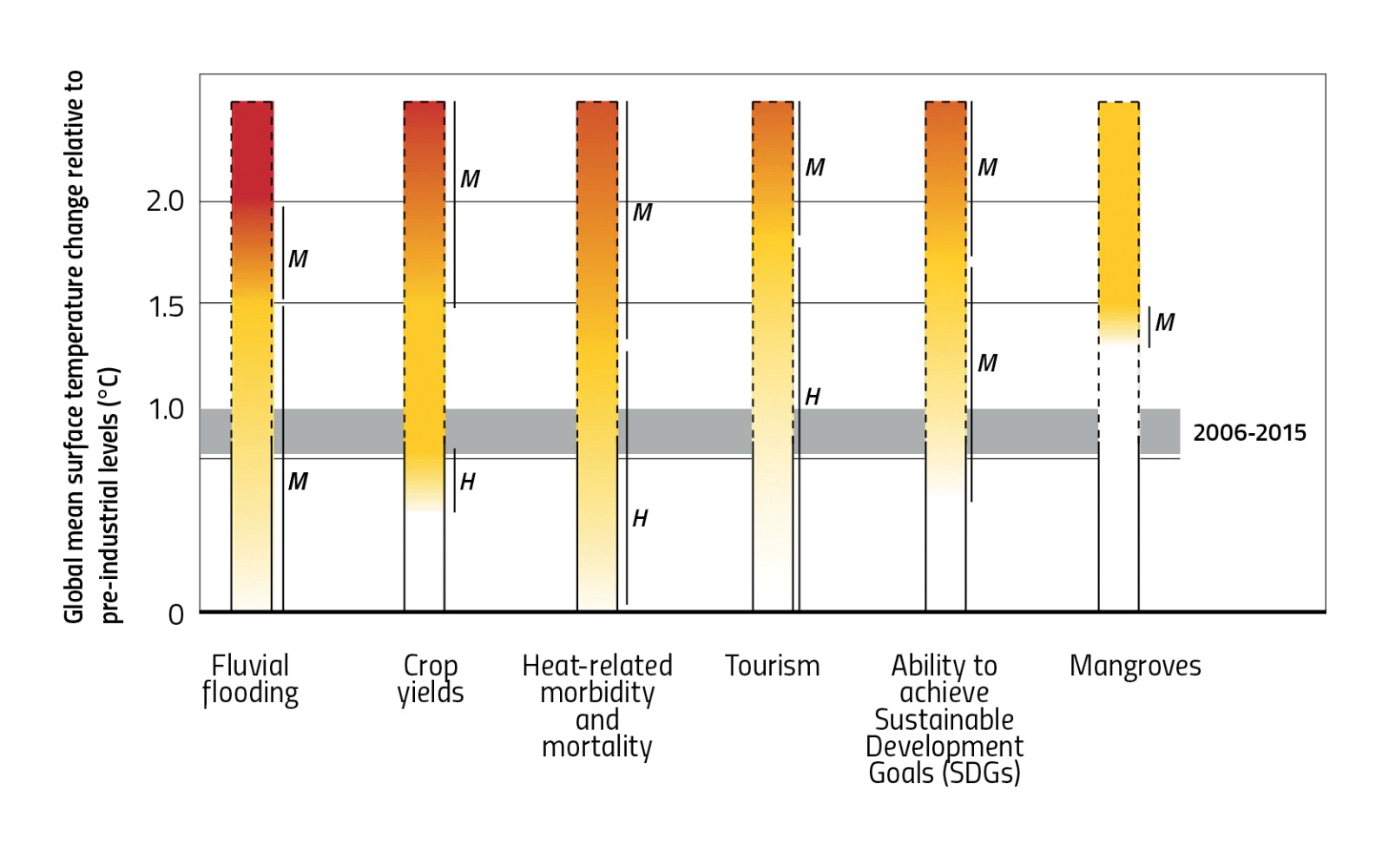 A comparison on projections for warming of 1.5°C versus 2.0°C has been identified for the following:

3 Emission pathways are classified by their temperature trajectory over the 21st century.

Pathways available to limit warming to 1.5°C were examined, to determine the pros and cons of each emission pathway. Limiting warming to 1.5°C would require systems transformation incorporated with sustainable development. It would also require rapid and extensive transitions in land, energy, industry, buildings, transport, and cities.

CDR would be used to achieve net negative emissions to return global warming to 1.5°C. “To date, only a few published pathways include CDR measures other than afforestation and Bioenergy with Carbon Capture and Storage (BECCS). Some pathways avoid BECCS deployment completely through demand-side measures and show greater reliance on AFOLU-related CDR measures” such as afforestation (Summary for Policy Makers - IPCC, 2018).

With projected negative climate change impacts on agriculture, changing agricultural practices would be an effective climate adaptation strategy. A diversity of adaptation options exist including mixed crop-livestock production systems and improvement of irrigation efficiency. “Improving the efficiency of food production and closing yield gaps has the potential to reduce emissions from agriculture, reduce pressure on land and enhance food security and future mitigation potential” (Summary for Policy Makers - IPCC, 2018).

4.  STRENGTHENING THE GLOBAL RESPONSE IN THE CONTEXT OF SUSTAINABLE DEVELOPMENT AND EFFORTS TO ERADICATE POVERTY

“A mix of mitigation and adaptation options implemented in a participatory and integrated manner can enable rapid, systemic transitions in urban and rural areas that are necessary elements of an accelerated transition to 1.5°C worlds” (Summary for Policy Makers - IPCC, 2018). Mitigation and adaptation measures are most effective when aligned with economic and sustainable development, and when local and regional governments are supported by national governments. 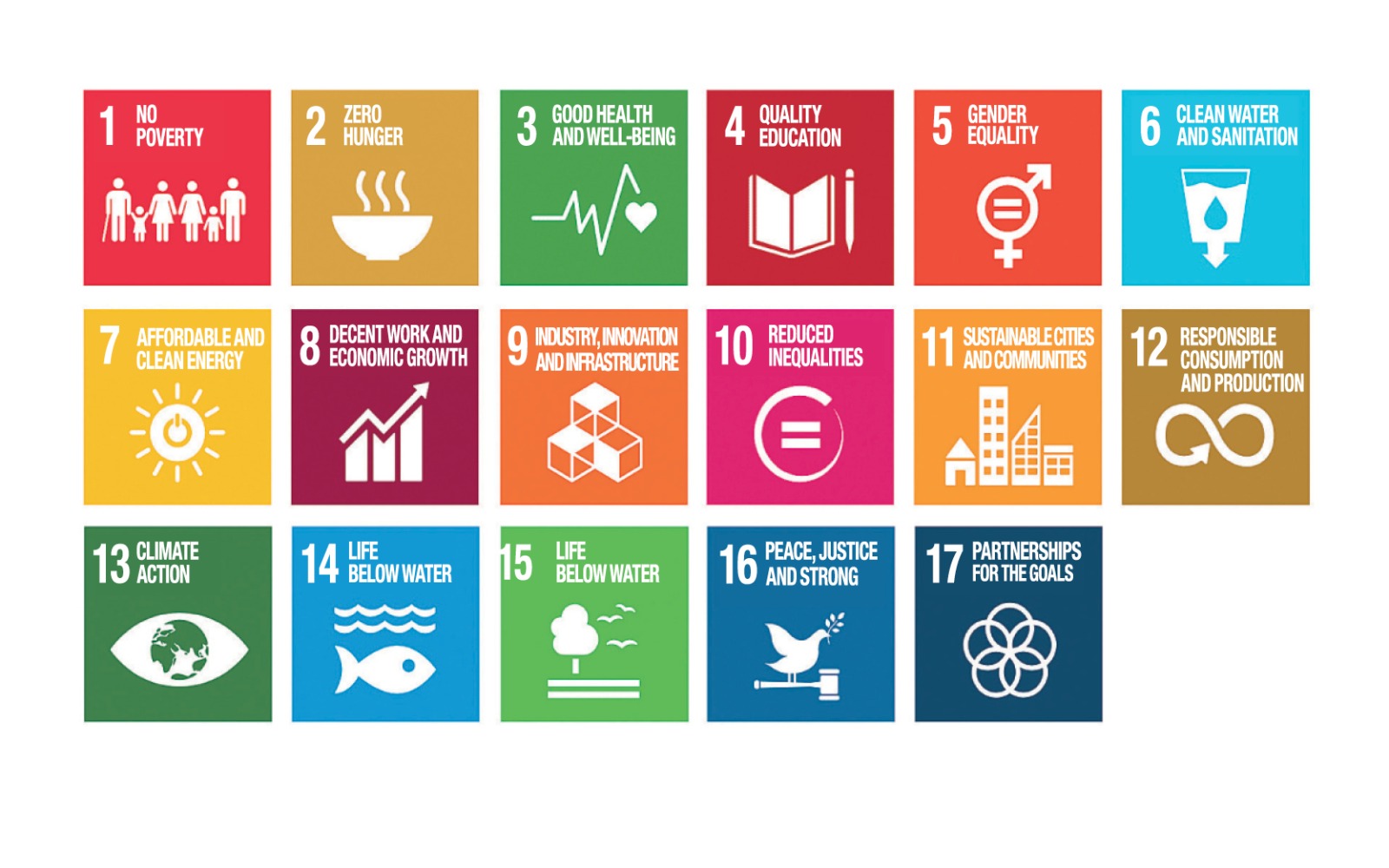 Collaborations between adaptation strategies and the Sustainable Development Goals (SDGs) are expected to be valid in a 1.5°C warmer world. These synergies are significant for agriculture and health, advancing SDGs

3 (healthy lives and well-being), and

Limiting warming to 1.5°C is an important global goal for the country as a global average temperature increase of 2°C translates to up to 4°C for South Africa by the end of the century (DEA, 2015). The Department of Environmental Affairs has commented on their expectation of reduced income and labour productivity in rural communities as a result of negative climate change impacts on agricultural input (DEA, 2013).

To meet the 1.5°C warming, reduce the severity of the predicted climate change impacts and as a form of climate change mitigation, South Africa would need to move away from fossil fuels such as coal and move towards transformation in the energy sector to renewable energy. The sugar industry has been engaging continuously with government and now needs government support to incorporate bioethanol into the country’s fuel ethanol mix which will not only help revitalise the South African sugar industry but it will also achieve the country’s goal of reducing emissions through the use of a cleaner-